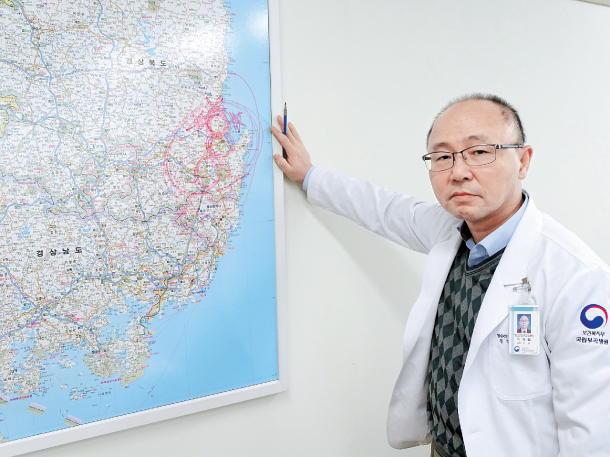 Psychologist Lee Young-ryeol points out cities hit by earthquakes on the map in his office in Bugok National Hospital in South Gyeongsang. [BUGOK NATIONAL HOSPITAL]

Around 2:30 p.m., Psychiatrist Lee Young-ryeol felt tremors at his hospital in Changnyeong, South Gyeongsang and knew something bad had happened. Lee is president and CEO of Bugok National Hospital. The tremors he felt were from the 5.4 magnitude earthquake that hit the city of Pohang in Gyeonggi Province - 93 kilometers (58 miles) away - on Nov. 15.

Lee immediately arranged for his doctors and nurses to go to Pohang.

“When you’ve traveled to areas hit by natural disasters for 10 years,” said Lee, “your body automatically starts moving as if by reflex when you feel something like that.”

For the past decade, the psychiatrist has given professional guidance to patients overcoming natural disaster traumas both on-site and at his hospital. From the Taean oil spill in 2007, to earthquakes ranging from 5.1 to a 5.8 magnitude in Gyeongju last year, Lee was there for people coping in the aftermath of a calamity.

Lee remained in Pohang for two weeks to help survivors overcome the initial shock of the quake. Some people refused to return home because they couldn’t bear seeing the damage. Others could not even bear feeling cell phones vibrate in their pockets.

“But as time goes on, these feelings can eventually turn into high levels of anxiety, depression or guilt.” The trauma can manifest itself physically in weight loss, insomnia and aches on one’s body. In extreme cases, a survivor might develop post-traumatic stress disorder (PTSD) or commit suicide.

Unlike other natural disasters, an earthquake makes people particularly anxious because they can’t see it, and it doesn’t end with one occurrence - they also have to deal with aftershocks. Pohang endured many aftershocks following the quake.

Lee visited homes of old people left to fend for themselves and displaced people living in tents to listen to their stories. Any vibration or an image that reminds survivors of an earthquake can upset them, said Lee.

“During one of my sessions with an elderly man,” recounted Lee, “the window rattled briefly due to the wind, and it really shook him up.

“It’s not only one or two people who acted like that. Many survivors displayed similar behavior.”

Lee said that people who are economically disadvantaged or battling an illness are the most vulnerable to natural disaster trauma. They start asking, “Why do these things only happen to me?” which can lead to suicidal thoughts. To help survivors, Lee invites them for counseling at Bugok National Hospital. From Pohang alone, 351 people made visits to the hospital since the quake.

A support group in Pohang led by Lee has been active for more than two weeks and gave 6,456 counseling sessions to 1,151 people as of Nov. 30. A similar group aided 1,000 survivors of the Gyeongju earthquake for 10 days last year in North Gyeongsang.

One couple who survived the earthquake in Gyeongju recently moved to Pohang only to experience another one. Coping the second time around became impossible, and the couple became distant and annoyed with one another.

Lee advised the couple to try and tolerate each other for the next year and “for the rest of your lives, you will be thankful that you have each other and live happily.”

He recalled the couple looking at him with a bright expression after hearing his advice.

Lee is considered a veteran of on-site natural disaster trauma counseling. He’s had to learn from mistakes in the past.

In January 2008, Lee went to Taean County in South Chungcheong to help residents affected by an oil spill. At a meeting at the town hall, he explained the symptoms of depression.

“I was trying to explain what depression was,” Lee recalled. “I guess it sounded like a lecture to the residents. They were infuriated and I was kicked out.”

“There needs to be a standard for the extent of counseling given, the clear role of the person treating the patient and who is permitted to give this kind of treatment,” Lee said. “The objective should be to create a credible government service treatment center for natural disaster trauma patients.”

Though Lee believes that government and professional aid is crucial, he also thinks that “nothing beats the support and love” from family and friends.

“No one knows when patients will fully recover from such a trauma,” said Lee. “But if friends and family support them until the end, they will be able to overcome it quicker.”