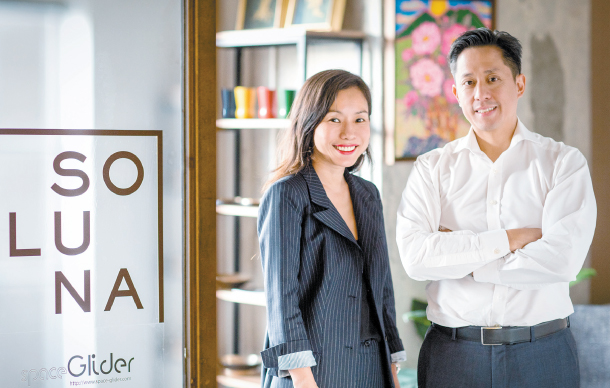 HONG KONG - The artistic couple that heads design company Soluna Living made their way to the Philadelphia Museum of Art Craft Show, one of the largest premier craft shows in the United States, this year along with 25 other Korean artists. The fair is primarily open to American artists, but this year Korea was selected as a guest country.

Rachel Lee and Steven Yaung from Soluna Living displayed sets of Korean ceramics, metalwork, jewelry and fabric crafts at the show. The work of several Korean participants including Ha Ji-hoon, Lee In-chin and Cheon Woo-sun were chosen to be permanently displayed at the Philadelphia Museum of Art after receiving positive reviews.

Attendance was about more than just showing off their work. The exhibition and sales event allowed them to fulfill their vision of promoting Korean culture and art abroad.

“Soluna Living was born from a pair of lacquered Korean chopsticks,” said Lee, “The lacquered items might be expensive, but I realized their quality and craftsmanship is really great.”

But Lee and her Chinese-American husband felt that such items are underappreciated, prompting them to build a design house and embark on different projects.

“Hong Kong has positioned itself as Asia’s hub in the art field because there are a number of leading figures working at multinational luxury fashion groups, and the city also hosts Art Basel,” said Yaung.

“Korean crafts can also appeal to a global audience,” he said.

The two first met while traveling. Before marriage, they maintained a long-distance relationship, as Lee lives in Seoul and Yaung in Hong Kong. They moved to Hong Kong together five years ago where Lee curated a Korean art exhibition while Yaung took a consulting job.

The name Soluna derives from the sun (sol) and the moon (luna) to convey the message that it shows items that can be used from morning to night. Soluna Living plans to launch pop-up stores and various exhibitions abroad to feature Korean crafts. The company also launched a website to sell the work of artists living in Hong Kong and the United States.

The two said that their major target is not Korean consumers because their objective is to let people outside of Korea appreciate the country’s artworks.

To achieve that goal, they said, their top priority is to find more artists.