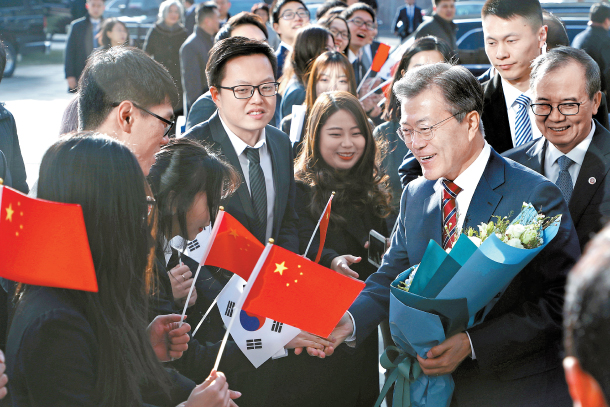 Korean and Chinese students at Peking University welcome Korean President Moon Jae-in, who received a standing ovation for a speech at the university on Friday. [YONHAP]

BEIJING - Korea and China must work together to tackle Kim Jong-un’s nuclear threats and the security crisis in Northeast Asia as they fought Japanese military aggression in the past, President Moon Jae-in said Friday at a university lecture here.

Moon’s speech at Peking University focused on his hope to improve Korea’s ties with China and expand bilateral cooperation beyond trade into the political and security fields. About 300 students attended the event, which took place on the third day of Moon’s state visit to China.

“China and Korea together defeated colonialism and imperialism,” Moon said, referring to the two countries’ military and diplomatic cooperation against Japan’s military aggression in Asia until its World War II defeat in 1945. “I hope we will work together to overcome the current crisis in Northeast Asia.”

Moon said North Korea’s continuing provocations, particularly its latest launch of a new intercontinental ballistic missile, are serious threats to global peace beyond the Korean Peninsula and Northeast Asia. He urged China, which shares a border with North Korea, to face the seriousness of the problem. “Escalated tension in the region due to the North’s nuclear development is a great threat to peace and development of not only the South but also China,” Moon said.

Quoting an old Chinese saying - “United hearts of two people are sharp enough to cut metal” - Moon said, “When Korea and China are united, we can overcome any challenges in building peace on the Korean Peninsula and Northeast Asia.”

Moon reiterated agreements he reached with Chinese President Xi Jinping at Thursday’s summit. “The two countries agree that a nuclear-armed North Korea will not be accepted under any circumstance,” he said. “We also share a firm stance that strong sanctions and pressure are necessary to stop the North’s provocations.

“We also share a deep understanding that a war must never be repeated on the Korean Peninsula and the North Korean nuclear issue must be resolved peacefully through dialogue,” Moon said, adding that a bright future will be offered to the North, if it makes the right choice.

In the speech, Moon also tried to get China’s understanding of Korea’s stances on some sensitive security issues. “I hope Korea-China relations will become a relationship that the two sides walk in each other’s shoes and understand each other,” he said.

Although Moon did not address specific contentions, it was obvious that he was seeking to mend the rupture in bilateral relations over Korea’s deployment of a U.S.-led antimissile system. He was also making a request for China to exert more pressure on the North to end the nuclear crisis.

In the speech, Moon supported Xi’s “One Belt, One Road” project, proposing strategic policy cooperation between Seoul and Beijing. He said Xi’s initiative to empower China in global affairs with a China-centered trading network is similar to his New Northern and Southern policies to expand Korea’s economic and security cooperation with Eurasia and Southeastern Asia. “If the two countries develop bilateral relations based on the similarity in policy goals, it will contribute to mutual prosperity and regional peace,” Moon said. “Furthermore, we can become partners for Asia’s development and the prosperity of the human race.”

The speech ended with a standing ovation by the audience.

In the speech and a press statement issued after the summit, the principle was stipulated that Seoul and Beijing oppose a war on the Korean Peninsula, which experts said was a clear message to Washington.

“The United States keeps talking about a military option against the North,” said Chung Jae-hung, a research fellow at the Department of Security Strategy Studies of the Sejong Institute. “Public opposition by Korea and China to a war means the two countries do not want the United States to exercise the option. It may cause a problem in the future between Seoul and Washington.”

The Moon administration is clearly leaning toward China, he said. “Because it made clear its opposition against the military option, the direction is clearly different from the direction the United States wants to move forward,” Chung said. “That means Seoul has a different idea. I am worried how Washington will perceive this in the future.”

In the press statement for the summit, Moon and Xi also reaffirmed the principle that the Korean Peninsula must remain nuclear-free - Moon’s assurance to Xi that the South will not deploy tactical nuclear weapons, whether they are its own or from the United States.

Moon made no straightforward demands to China to get the North to stop its threats. Although he told his Japanese counterpart, Prime Minister Shinzo Abe, last month that he planned to ask Xi to play a stronger role, Moon only made a roundabout request.

Expectations had been high that Moon would ask Xi for a complete oil embargo on the North. Washington is pushing Beijing to include an embargo in an upcoming UN security resolution. “Because Moon was the leader who had a chance to sit down with Xi for a significant amount of time before the new resolution was adopted, the United States wanted Moon to press the issue,” a diplomatic source told the JoongAng Ilbo.

“There were no mentions of sanctions, while dialogue and negotiations and opposition to war were stressed,” Chung said. “Those are China’s stances. It is a message that Korea will go China’s way, not the U.S. way.”

Concerns were also made among diplomatic observers that highlighting Korea’s historic ties with China may cause ripples in trilateral cooperation with Japan and the United States.

As Moon’s trip started on Wednesday, the 80th anniversary of the Nanjing Massacre, Moon repeatedly expressed his sympathy to the Chinese people. Throughout his three days in Beijing, including the speech on Friday at Peking University, Moon reiterated the stance whenever he had an opportunity to address the public.

Moon’s enthusiastic support for Xi’s One Belt, One Road initiative may also invite friction with the United States because it is more than a simple infrastructure investment program. Korea has been reluctant to support U.S. President Donald Trump’s Asia policy of “free and open Indo-Pacific” as the strategy is seemingly intended to check an increasingly assertive China by expanding the concept of “Asia-Pacific” to include India.

“The summit was meaningful because an opportunity for a fresh start was made for Korea-China relations,” Professor Lee Jung-nam, head of the Asiatic Research Center of Korea University, told the JoongAng Ilbo. “But coordinating with the U.S. on the nuclear crisis is a key issue. China is also trying to give Korea a message that bilateral relations will not proceed the way Korea wants if Korea acts against China’s interests.”

Moon wrapped up his three-day stay in Beijing and left for Chongqing, a southwestern industrial city. He will return to Korea on Saturday.