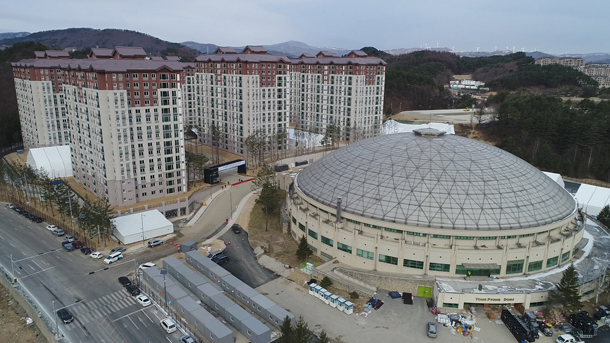 The PyeongChang Organizing Committee for the 2018 Olympic and Paralympic Winter Games held a ceremony Friday at the athletes’ village to celebrate the completion of its construction. [YONHAP]

The construction of the athletes’ villages for the 2018 PyeongChang Olympics has been completed less than two months before the grand opening of the first winter game in Korea.

The PyeongChang Organizing Committee for the 2018 Olympic and Paralympic Winter Games (Pocog) held a ceremony Friday at the athletes’ village, officially called the PyeongChang Olympic Village in Pyeongchang, Gangwon, to celebrate the completion.

According to the secretary general, the villages will offer various amenities for the athletes, including banks, barbershops, fitness centers and laundry rooms as well as prayer rooms. They will also provide an Off Air Processing service, which takes care of the departure process for athletes before they leave the country.

In addition, various cultural events will take place during the Winter Games for the athletes to enjoy.

After the Winter Olympics and Paralympics are over, the villages will be used as regular residential apartments, a move described as “providing tangible legacies of the Olympic Winter Games” by the International Olympic Committee. The athletes’ village for the 1988 Summer Olympics in Seoul is also currently used as residential space.

“All of the units are already sold out,” said Yeo Suh-hyun, the venue general manager of Pocog.

“Now that the construction of all the venues is completed, it’s important that all the people in Korea enjoy the PyeongChang Olympics and make it as a festival where everyone participates,” said Lee Hee-beom, the president of Pocog.

The Olympic village will officially open on Feb. 1.