Korea loses 1-5 against Sweden at Ice Palace in Moscow

Korea loses 1-5 against Sweden at Ice Palace in Moscow

Despite an opening goal, the Korean national men’s ice hockey team concluded the Channel One Cup with another 1-5 loss to Sweden, ranked third, on Saturday at the VTB Ice Palace in Moscow. 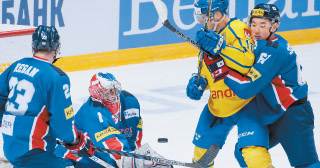 Sweden’s Jakim Lindstrom, third from left, tries to score against Korea’s goalie Matt Dalton, second from left, during the Channel One Cup at VTB Ice Palace in Moscow on Saturday. [AP/YONHAP]

But Korea once again showed great competitiveness against the top-ranked team at the pre-Olympic tournament, the last international tournament before the Olympics in February.

Korea got off to a great start by pressuring Sweden’s offensive line. After a scoreless first period, less than a minute into the second period, Michael Testwuide allowed Korea to take the lead, assisted by Kim Ki-sung. But Korea’s lead only lasted three minutes, as Sweden’s Alexander Bergstrom scored an equalizer. At 5 minutes 11 seconds, Korea allowed another goal by Anton Lander to allow Sweden to take the lead.

Korea concluded the second period by allowing another goal, followed by two more in the third period.

Though Korea was winless in the tournament, losing 2-4 to top-ranked Canada and 1-4 to fourth-ranked Finland earlier on, all three games showed the team’s potential, as they managed to score a total of four goals in three games.

Normally in ice hockey, four offensive lines are created with the first line assigned with the best offensive players.

Up until the 2016-2017 season, Korea was among the bottom-ranked teams in the world, and wasn’t even able to earn a berth to compete at the PyeongChang Olympics.

Normally, the host country gets an automatic berth, but since Korea wasn’t competing at the level of the world’s top team, International Ice Hockey Federation (IIHF) President Rene Fasel didn’t guarantee Korea’s spot prior to the 2014 IIHF Division I World Championship in Korea.

Proving Fasel’s judgment right, Korea lost all five of its matches during the event and was relegated to Division I Group B.

But with the addition in July 2014 of head coach Jim Paek, former defenseman of the Pittsburgh Penguins, and several naturalized athletes from Canada and the United States over the past three seasons, the team reached a peak in the 2016-17 season, making it to its highest-ever world ranking of 21st, and being promoted to the IIHF World Championship, the top division.

This has allowed the team to debut at the PyeongChang Olympics in Group A with Canada, the Czech Republic and Switzerland.