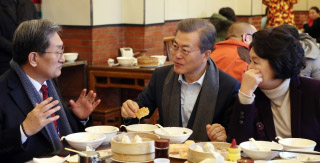 President Moon Jae-in, center, and First Lady Kim Jung-sook, have breakfast with Korean Ambassador to China Noh Young-min and his wife in a folksy Chinese restaurant in Beijing on Dec. 14, the second day of his four-day state visit to China. [YONHAP]

Koreans are sensitive about reputation. They like to get recognized for ability, authority and character. This sensitivity to reputation is a sentiment unique to Koreans, just like affection. Since many want to be recognized socially, those who lose face can hardly raise their heads.

Koreans consider the reputation of a nation as its national status. President Moon Jae-in’s visit to China is related to Korea’s integrity. It was a state visit, but some think its reputation has been damaged — seriously. A series of events during the visit makes me think that the diplomatic mistakes and treatments may have been intentional.

First, there is the matter of meals. Chinese are said to value eating. Reception is often an expression of hospitality and friendship. One meal can be more effective in building personal trust than ten meetings. Some leaders put emphasis on “diplomacy at the dining table.” During a four-day trip, Moon had only two meals with high-level Chinese officials — Moon and President Xi Jinping’s dinner banquet on Dec. 14 and a luncheon with China’s Communist Party Secretary for Chongqing on Dec. 16. A luncheon with Premier Li Keqiang did not happen.

Moon had dinner on Dec. 13 and breakfast and lunch on Dec. 14 without meeting Chinese officials. The Blue House promoted the fact that he made a “surprising appearance” at a local restaurant for a chance to approach Chinese people. It was something that the Korean government had arranged. But inviting a foreign guest for a state visit includes providing the best hospitality. Normally, powerful people may approach and invite the guest for meals. It is incomprehensible that Moon had to dine on his own.

Second, the choice of date was problematic. I cannot understand why the visit coincided with the 80th anniversary of the Nanjing massacre. When Moon arrived in Beijing on Dec. 13, Xi headed to Nanjing to attend the memorial ceremony. Having invited a “state guest,” the host was not home. Li was in Beijing, but he was not available. From the start, it was unreasonable for Moon to expect celebration on such a mournful day. He met with Xi 30 hours after arrival in Beijing. The spectre of toadyism hangs around.

Third, diplomatic protocol is about honor. The position of the greeter suggests a lot. During U.S. President Donald Trump’s state visit to Korea in November, Moon received him at Camp Humphreys in Pyeongtaek, Gyeonggi, to demonstrate the highest level of respect and hospitality. When Moon arrived at the airport in Beijing, however, China’s deputy foreign minister came to welcome him. Trump was received by Yang Jiechi, China’s state councilor, and President of the Philippines Roberto Duterte was received by Foreign Minister Wang Yi. So the protocol was not appropriate for a state visit.

China’s history shows that China offers extravagant reception to the powerful and poor treatment for the weak. Korea does not expect the “imperial reception” of emptying out the entire Forbidden City as it did for Trump.

Yet, the president of Korea is hardly a position to be treated poorly. Korea may have partly brought it upon itself. The submissive attitude, a rash scheduling of the visit within the year and inviting Xi to the PyeongChang Winter Olympics in February all led to the diplomatic disaster. Not just the president, but the entire nation has lost face. Our national status has fallen. Those responsible for arranging this awkward state visit should be reprimanded. But the Blue House does not agree that the treatment was poor. I am more worried about this gap in understanding than China’s poor treatment of Moon.