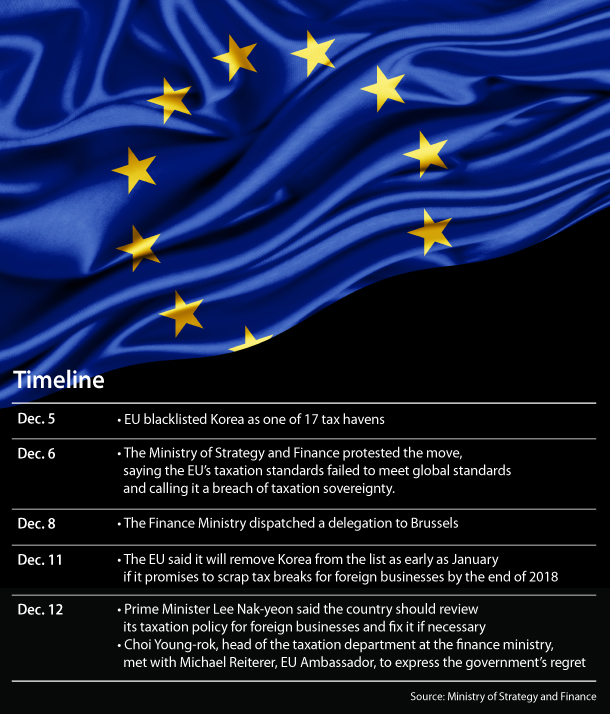 The European Union’s surprise move on Dec. 5 to blacklist Korea as one of 17 tax havens came as a shock to Korean authorities here, setting in motion a frantic effort to remove Asia’s fourth largest economy from the list of countries susceptible to, or even encouraging, tax evasion.

By including Korea, the world’s seventh largest trading country, the Brussels-based multinational body put Seoul on a par with far-flung island nations such as American Samoa, Barbados, Namibia and Panama. Korea is the only major economy that belongs to both the G-20 and OECD that made onto the blacklist, the first of its kind. Brussels said the composition of the list “marks a key victory for transparency and fairness,” and explicitly referred to the blacklisted nations as “tax havens.”

Trying to find a way off the list, the government hurriedly dispatched a delegation led by Lee Sang-yool, tax affairs director general of the Finance Ministry, on Dec. 8. The delegation met with EU officials in Brussels and held three rounds of talks looking for a compromise. Choi Young-rok, head of the taxation department at the finance ministry, also met with Michael Reiterer, EU Ambassador to Seoul, on Tuesday to express the government’s regret over the blacklist.

In what was seen as a frantic effort to downplay the decision, the Ministry of Strategy and Finance even called on local media to refrain from using the term “tax haven,” claiming it was not the wording to use.

The ministry insisted on using the official label “Non-cooperative tax jurisdictions,” a demand that fell on deaf ears as the EU itself made it clear that the list was about “tax havens,” as declared by Pierre Moscovici, EU Commissioner for Economic and Financial Affairs, Taxation and Customs.

The commissioner warned that “blacklisted jurisdictions must face consequences in the form of dissuasive sanctions,” adding “no one get a free pass.” While the blacklist is not law-binding and no specific punitive actions have been announced so far, the fact that Korea was the only major economic powerhouse included came across as a national embarrassment.

The EU took issue with Korea’s five to seven year exemptions on corporate and income taxes for foreign businesses that belong to a “new growth engine industry that is vital to the advancement of domestic industrial structure.”

The EU perceived such special tax treatment as a violation of fair tax competition that puts domestic businesses at a disadvantage with foreign competitors. It also cited the possibility of such tax benefits turning into a harmful tax regime that encourages artificial offshore structures with no real economic activity.

“The taxation exemptions questioned by the EU started in 1962 when the country was doing its best to lure in foreign capital,” a senior finance ministry official told the Korea JoongAng Daily, speaking on the condition of anonymity, on Thursday.

“As far as I understand, Korea and Turkey are the only two OECD member states that still offer such tax benefits for foreign businesses. There are no other countries with major economies that provide such tax exemptions [to appeal to foreign businesses],” the official continued. Turkey reportedly avoided being blacklisted after promising the EU that it would rescind its exemption policy before the Dec. 5 disclosure.

The Korean government balked at the EU at first, saying Brussels applied different measures that “violated international standards,” citing the OECD’s findings that did not identify Korea’s favorable taxation policy for foreign businesses as a tantamount to a harmful tax regime. It went so far as to call the listing a “breach into its taxation sovereignty,” since it is not an EU member state.

But in the days that followed what at first was an angry rebuke seemingly gave way to serious consideration of terminating the 55-year-old taxation policy.

The first sign of such a shift in tone came from Prime Minister Lee Nak-yeon during a cabinet meeting on Tuesday, saying Seoul should update its taxation policy for foreign businesses if they lag behind international standards. “We should review our tax relief programs for foreign businesses to see whether they match with international standards,” said the prime minister, a week after Korea was included on the EU list.

Lee’s remark at the cabinet meeting followed reports that Fabrizia Lapecorella, the EU’s director general for code of conduct on taxation, told the Korean delegation that the EU could remove Korea from the list in January should Seoul scrap tax breaks for foreign businesses.

Asked whether Korea was considering or could consider rescinding the half a century old tax policy, the senior finance ministry official refused to confirm.

Hong Jin-ki, senior researcher at the Korea Institute for Industrial Economic and Trade, told the Korea JoongAng Daily that the EU’s blacklist could serve as “a wake up call” for Korea to abolish what he called “outdated” tax programs introduced 55 years ago.

“The tax benefits for foreign businesses were introduced [in 1962] when Korea was in dire need of foreign investment because we had neither capital nor technology back then. But with our economy now about to enter a $30,000-a-year era, we should move in a direction that abolishes discriminatory practices that favor foreign businesses while putting domestic companies at a disadvantage.”