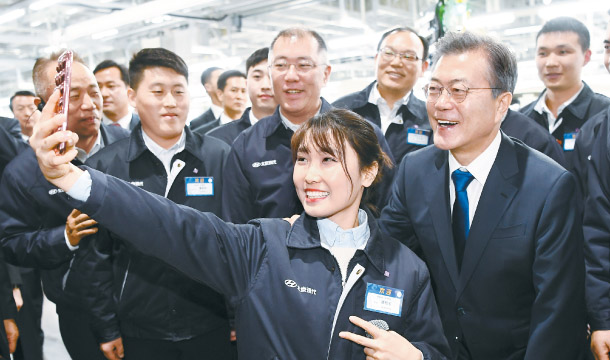 CHONGQING, China - President Moon Jae-in wrapped up the final day of his state visit to China with events aimed at alleviating Korean companies’ troubles caused by Beijing’s unofficial sanctions in response to the deployment of a U.S.-led antimissile system.

After a three-day stay in Beijing, which included meetings with top Chinese leaders including President Xi Jinping and Premier Li Keqiang, Moon arrived in the southwestern industrial city on Friday night. He gave a speech at the Korea-China Industrial Cooperation Forum and visited Hyundai Motor’s new factory to meet with Korean and Chinese workers.

Accompanied by top government officials and businessmen, including Hyundai Motor Vice Chairman Chung Eui-sun, Moon inspected the manufacturing facility. He also met with 10 Chinese employees - with the help of a Korean-Chinese worker that interpreted the conversation.

“I hope this factory will conquer the Chinese automotive market,” Moon told the workers.

Korea’s export-dependent economy has been dealt a serious blow after China, its largest trading partner, imposed unofficial economic sanctions over the past year. In protest of the deployment of the antimissile system in Korea, China carried out retaliations on Korean companies, artists and products and banned group tours to the country. The retaliations cost the Korean economy some 10 trillion won ($9.21 billion).

During his visit to the factory, Moon met with representatives from 10 Korean companies operating in Chongqing as Hyundai Motor’s partners.

The factory was built by Beijing Hyundai Motor Co., a joint venture between China’s state-owned BAIC and Korea’s Hyundai Motor. Over 1 trillion won was invested in the Chongqing factory, capable of producing 300,000 cars annually.

The factory currently hires 1,288 local workers and its mass production began in August, following the completion of construction in March. 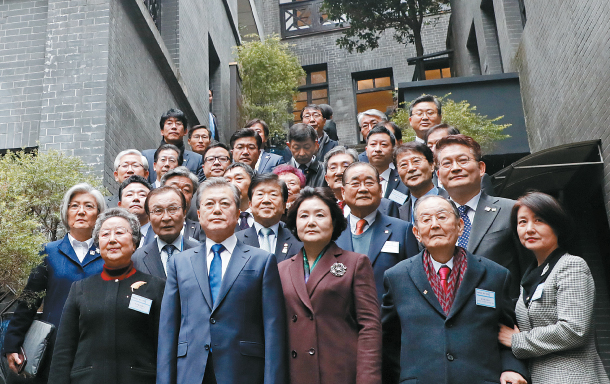 Korean President Moon Jae-in and the first lady, Kim Jung-sook, stand in front of the building where the office of the Provisional Government of Korea used to be housed in Chongqing, China, on Saturday. Moon wrapped up his four-day state visit to China and returned to Korea Saturday night. [YONHAP]

Earlier in the day, Moon gave a speech at a forum to communicate Korea’s intention to improve economic ties with China through his visit to the city.

“As the hub of the One Road, One Belt project, Chongqing is recording over 10 percent growth every year,” Moon said. “This city is the best representation of China’s unlimited growth potential. I am more than proud to say that about 70 Korean companies are participating in writing a new history of Chongqing.”

In the speech, Moon made four proposals, aimed at restoring Korea’s economic exchanges with China. He said he and Xi agreed at the summit earlier last week to find specific cooperative measures to link the One Road, One Belt project and Korea’s New Northern and Southern policies to seek mutual prosperity and peace in the region.

Other proposals were also made to expand Korea-China economic cooperation, a clear attempt to prevent Beijing from unilaterally endangering business ties over a diplomatic row.

Moon said he will actively support companies from Korea and China to jointly enter markets in third countries. At the summit, the Korea Trade Insurance Corporation and China Construction Bank signed a deal to support joint ventures in infrastructure markets, Moon said.

He also urged China to expand its bilateral free trade agreement with Korea to the service and investment sectors and eventually form a regional deal to lower trade barriers.

Signs of a thaw in the frosty economic relations were seen throughout the trip, particularly when Moon had a meeting with Li Keqiang on Friday evening in Beijing. Li, the second-highest official of the Chinese Communist Party, with powerful oversight of the country’s economic policy, told Moon, “I expect spring days for China-Korea relations.”

At the meeting, Moon asked for Li’s support to restore the business and economic relations strained by the unofficial sanctions designed to make Korea suffer for allowing the deployment of the Terminal High Altitude Area Defense (Thaad) antimissile system. He proposed to restore the communication channels between the two countries’ economic and trade ministries suspended by the row.

Li responded positively that the channels will be restored and cooperative projects between the two countries will resume. “MOUs were signed for economic, trade, energy and health projects,” Li said. “What’s more important is faithful implementation of the projects, and I hope we can see great accomplishments.”

Moon also proposed to Li that they designate 2018 and 2022 as years to visit each other. Korea hosts the Winter Olympic games in 2018 and Beijing hosts the event in 2022.

Li gave a positive response that he will seriously consider it. “China will learn from Korea’s organization of the event,” he said, “and many Chinese people will visit Korea during the period to watch the games and tour the country.”

Moon also had a luncheon with Chen Min’er, the Communist Party secretary of the city. A confidant of Xi, Chen is a rising political star. He used to work for Xi in Zhejiang Province, where Xi was provincial party leader. Chen climbed rapidly through the party ranks as Xi took the presidency and bolstered his power.

Earlier in the morning, Moon visited the former office of Korea’s provisional government, highlighting the long history of friendship between Korea and China and their joint struggle against Japanese imperialism.