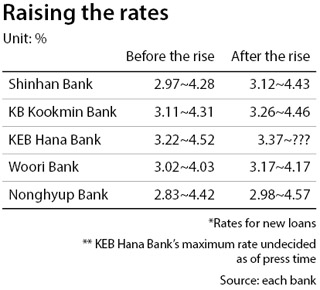 Following a rise in the Cost of Funds Index (Cofix), commercial banks in Korea are pushing up their interest rates on adjustable-rate mortgages, further raising concerns over the burden of repayment on Korean households amid the record-breaking rise of debt in the country.

The Korea Federation of Banks, a lobbying group that represents local banks, raised the Cofix for November on Friday, setting a yardstick for new funds at 1.77 percent for the month, up 0.15 percentage points from October, the steepest rise in the figure since February 2011. The Cofix rate for outstanding balances was set at 1.66 percent on Friday as well, 0.04 percentage points up from the previous month.

The move to raise the Cofix benchmark to the highest level in the past two years comes after the rise of key interest rates in Korea as well as in the United States.

The Bank of Korea raised its key rate on Nov. 30 for the first time in six years and five months from a record-low 1.25 percent to 1.5 percent. The U.S. Federal Reserve also pushed up its own rate by a quarter of a percentage point to a range of 1.25 to 1.50 percent last week.

“The Cofix rate on monthly acquired new funds has increased from the previous month due to market interest rates,” explained the federation through a press release on Friday. “In general, the Cofix rate on outstanding balances reflects the market interest rate changes in a gradual manner, while the Cofix on monthly acquired new funds tends to change quickly in tandem with market rates since it is calculated based on newly financed funds.”

In line with the increase in the Cofix, major commercial banks are pushing up their own interest rates on adjustable loans starting today.

Interest on adjustable-rate loans is based on the Cofix as well as with spreads set by banks. Borrowers can choose from two Cofix rate options based on either the banks’ outstanding balances or monthly acquired new funds.

With the rise in adjustable rates on mortgages across the industry, the burden of repayment on borrowers is also likely to increase. Household debt in Korea is already at a record level at 1,419 trillion won ($1.3 trillion).