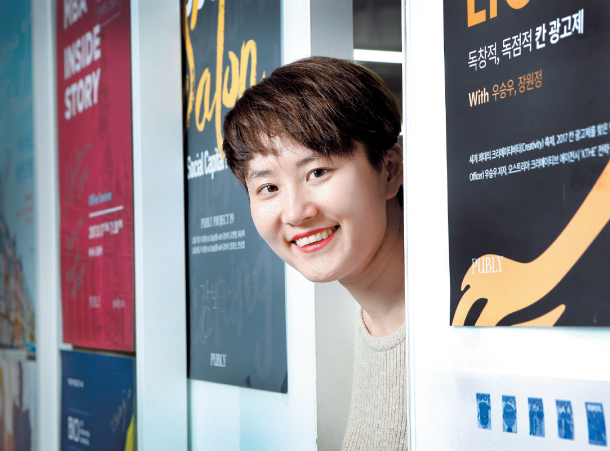 After Park So-ryoung, 35, returned to Korea from graduate school two years ago, she saw an opportunity in a niche digital media market.

Koreans, she proffered, would be willing to pay for long articles.

Despite the widespread perception that online content should be free, Park, a former McKinsey consultant, was confident that quality writing would encourage people to open up their wallets. She believed there was demand for smart in-depth analyses of current events and trends that fall somewhere between a news article and research paper.

In 2016, along with Anna Kim, she launched Publy, a subscription-based online service that provides members with articles on esoteric subjects ranging from industry and technology to business management and tourism.

Publy takes a novel approach to publishing. Instead of centrally curating pieces, Publy has a crowdfunding aspect - a contributor proposes an idea, a deadline is set and readers place reservations for the piece. A project will only proceed if enough readers say they are interested.

One of the earliest articles to appear on Publy was a publishing insider’s perspective of the 2015 Frankfurt Book Fair. While there were plenty of news articles covering the annual event, readers said they had trouble finding a piece like the one on Publy that offered a vivid recollection and analysis of the event from someone who attended.

Other articles currently being pitched on Publy include a piece about the 2017 London Design Festival, a guide to business trips in Shanghai and coverage of the 2018 World Economic Forum.

Park, who has a bachelor’s degree in business administration from Seoul National University and a master’s degree from the Harvard Kennedy School, said she has always been interested in education because she herself wasn’t happy with the Korean education system growing up. In college, she spent vacations teaching at an alternative school and worked at after-school programs for a couple of months before leaving for Harvard.

“I was deeply inspired by one of my favorite professors in graduate school who said that for a society to thrive and become more civilized, the two wheels of education and media are essential,” Park told the Korea JoongAng Daily in a recent interview at her office in southern Seoul. “I think Publy is playing the role of continuing education for adults in a format that lives up to the digital age.”

In less than a year, Publy has made its name for being a source of unique alternative media. Over 17,000 people have signed up for the service, and 5,500 readers have purchased articles that range from 15,000 won ($14) to a little over 20,000 won. Annual revenue has more than tripled from 120 million won last year to an estimated 450 million won this year.

The company is still making tweaks to its business model. It later developed a product starting from 50,000 won that bundles the online content with in-person seminars and panel discussions offered from the content’s creator as well as speakers related to the theme.

Transactions from corporate credit cards make up a fifth of all payments on Publy, Park said. Many Korean companies give their employees a monthly stipend for educational, cultural and health-related activities outside of work. The corporate spending on Publy suggests many employees are using their stipend for reading.

With over 100 articles on its site, Publy a few months ago launched a subscription plan that allows users access to all its past content for 21,900 won a month. The site keeps track of what subscribers are reading and where they stop reading to improve its services.

“Readers, or consumers, have this urge to meet the content provider and are willing to pay for the very experience,” Park said. “We set the price relatively high because consumers are willing to pay a lot for exclusive content. We can see that the lecture market also keeps growing.”

Below are excerpts from the interview with Park.

Q.What motivated you to take interest in media?

A. I didn’t like the uniform classes and exams when I was young. The alternatives to me were books, newspapers and magazines. The library in my neighborhood was excellent, and my parents subscribed to newspapers. Media naturally became a channel for knowledge.

I still subscribe to newspapers even though I read news digitally from my Facebook feed as well. I actually tried to become a reporter while I was still working as a consultant in 2008. I had to quit in the middle of training because the newspaper I got into did not seem to consider its reporters as a valuable asset.

After returning from the Kennedy School, I again tried to land a job at a media company - a management team devoted to preparing for the future of media - and even media content distributors - portal sites like Naver and Kakao - but that didn’t work out.

There are 13 full-time members working at the company, including me and Chief Content Officer Anna Kim as well as a pool of part-time editors totaling around 20 who have expertise in different fields and are mobilized whenever needed. The full-time workers also include developers, data scientists, marketers and project managers who are in charge of liaising between and managing contributors.

What are your editing policies?

We don’t necessarily pursue fluent and refined sentences. What’s more important is the presentation in a digital environment, such as footnotes, links to videos, graphics and sub stories that complement the main.

Some say Koreans are overly obsessed with learning.

That is true, but at the same time, it reflects reality. Those in their 20s, 30s and 40s have seen how the older generation ended their careers with no job guaranteed even before retirement unless one is equipped with certain expertise or knowledge. I can definitely say today’s younger generation is obsessed with this notion that they have no choice but to continue self-development throughout their lives.

There are two methods of growth for start-ups. One is earnestly working toward the break-even point, and the other is pouring in cash after getting hefty funding.

We decided to get investment at the beginning of this year and received 1 billion won in the first significant round of venture capital funding in August. We plan to hire more project managers, content merchandisers and engineers to better promote our content with an enhanced user experience.

We never stop deliberating on content categories. At this moment, we have set a goal of providing content to generalists and leaders who wish to wield influence or are already doing so. The pattern so far has shown that our readers are willing to pay for content directly related to their work but not for hobbies, leisure or culture. That means lifestyle content hasn’t been as popular on our digital platform, when it would have been a hit at independent book stores boasting unique products.

Management, economics, finance, technology and macro trends were most popular. Our readers tend to go ahead with paying when a few words in the title of an article instantly appeal to them.

Most Korean media outlets are having a hard time getting paid digital subscriptions.

That is the problem with us, too, which is why we came up with the idea of attracting readers through crowdfunding. We reached the conclusion that payers and users [readers] should be identical for the content producer to meet the demand of readers. But payers and readers are separate with newspapers, given payers are mostly corporations that are under pressure to subscribe. It’s not easy for newspapers to focus on both sides.

A lot of Publy content is related to Japan. Why?

It’s actually my favorite. I have always been more interested in biographies of corporate leaders and politicians than novels. There are excellent books from the United States, but Koreans tend to have this psychological distance. With Japan, which is geographically closer, we can empathize better, I think. I want to deal with more diverse content on Japan as part of the generation that grew up watching Japanese manga and reading Japanese novels.

Do you plan to export the content through localization?

Korea is geographically isolated, surrounded by the sea, and we can’t leave the peninsula without taking a plane or ship. The Korean language is related to neither English nor Chinese. Due to these traits, we naturally have this intellectual gap with powerful nations in the West.

The content that Publy provides leverages this gap, in my view. The language issue applies to other countries that do not use English or Chinese. We want to attract youngsters in the third world - Southeast Asian countries, in particular - who want to narrow their intellectual gap to our platform. We can localize our content for their language.