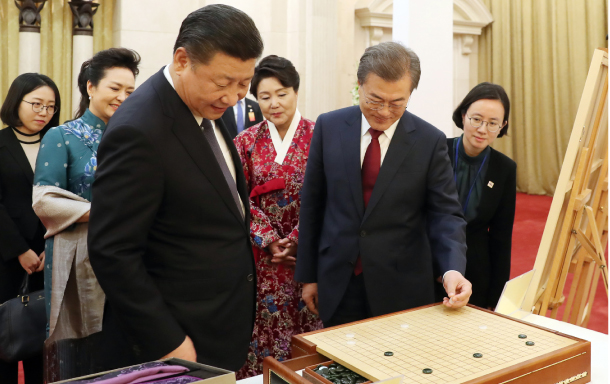 Korean President Moon Jae-in receives a Go board and Go stones as a present from Chinese President Xi Jinping at the state dinner in Beijing on Thursday. [YONHAP]

CHONGQING, China - President Moon Jae-in’s efforts to end China’s frosty diplomacy and economic retaliations have paid off, as he avoided further escalation over the deployment of a controversial antimissile system in Korea and repaired ruptured commercial ties during his visit to the neighboring superpower.

Moon, who took office in May, carried out his first presidential visit to China last week at the invitation of Chinese President Xi Jinping. During the four-day trip, which began on Wednesday, Moon first visited Beijing where he met with top officials to steady a relationship that has been put into a tailspin since last year over the deployment of the U.S. Terminal High Altitude Area Defense antimissile system in Korea.

The trip created momentum for the normalization of strained bilateral relations, as Moon managed to persuade China to lift its unofficial economic sanctions.

But it fell short of fully settling the Thaad dispute and finding a new resolution to the security crisis on the Korean Peninsula, which has worsened as a result of North Korea’s rapidly advancing nuclear and missile capabilities.

Moon sat down with Xi on Thursday and Chinese Premier Li Keqiang on Friday. Although Xi and Li both mentioned the Thaad dispute, their tones were softer, as they put more emphasis on restoring and improving the bilateral ties.

Throughout his visit, Moon repeatedly asked China to walk a mile in Korea’s shoes. While China expressed concerns that the U.S. military’s powerful radar can spy on its territory, Korea and the United States said Thaad is strictly to counter North Korean threats.

“I hope Korea will handle this issue properly,” Xi told Moon during their summit.

Zhang Dejiang, the chairman of the Standing Committee of the National People’s Congress, also said the two countries agreed to the step-by-step handling of the Thaad issue. “This means the two countries cannot resolve the issue at this stage,” a senior Blue House official later explained. “So it should be left unresolved.”

But in light of the lifting of sanctions, Li also said, “We can anticipate spring days for China-Korea relations.”

Li also vowed to restore the broken communication channels between the two countries’ economic and trade ministries. He also said he understands the hardships of some Korean companies in China, but that the investment environment has not worsened for them, and Korean companies will see many benefits when relations improve.

He also hinted that China will soon lift its ban on group tours to Korea, saying, “Many Chinese tourists will visit Korea during the PyeongChang Winter Olympic Games,” which are scheduled to begin in February.

Despite these successes, Moon failed to press China on exerting further pressure on North Korea. There had been speculation that he might ask Xi to impose a complete oil embargo on the regime, but he failed to do so during the summit.

Instead, Moon largely endorsed China’s policy on the Korean Peninsula, making clear that no war is acceptable to resolve the nuclear crisis and that dialogue and negotiation is preferred. This declaration came as the United States is increasingly weighing a military option on the North.

The Blue House also praised the agreement between Moon and Xi to expand Korea’s relations with China in an economic, political and security partnership, though this may invite concern by the United States.

Moon’s repeated mentions of Korea’s long history with China, with particular emphasis on their shared experience of Japan’s wartime military aggression, also caused concern as it may sour Korea’s trilateral cooperation with Japan and the United States.

The trip also was tainted by controversy. While the Blue House defended Moon’s itinerary as “humble” and “pragmatic,” some in Korea, particularly opposition politicians, said he was received poorly by the Chinese leadership.

China sent Assistant Foreign Minister Kong Xuanyou to receive Moon for the arrival ceremony at the airport in Beijing, prompting some to suggest that the delegate was too low in rank to receive a president on a state visit. China also hosted only two meals for Moon, including Xi’s state dinner.

Friendly events between Xi and Moon were also kept to a minimum. Accompanied by their wives, however, they did attend a cultural performance after the state dinner.