Tillerson walks back remarks on talks with North

Tillerson walks back remarks on talks with North 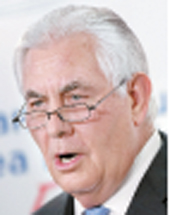 U.S. State Secretary Rex Tillerson backtracked from his recent offer of unconditional direct talks with North Korea, emphasizing as he addressed the New York-based UN Security Council that Pyongyang must “earn its way back” to the negotiation table.

“As I said earlier this week, a sustained cessation of North Korea’s threatening behavior must occur before talks can begin,” Tillerson told the 15-member council in New York Friday as it convened a ministerial meeting on Pyongyang. “North Korea must earn its way back to the table. The pressure campaign must, and will, continue until denuclearization is achieved.”

He added, however, “We will, in the meantime, keep our channels of communication open.”

Tillerson retreated from offering an olive branch to Pyongyang Tuesday at the Atlantic Council-Korea Foundation Forum in Washington, during which he said, “We’re ready to have the first meeting without precondition,” pointing out that “it’s not realistic to say we’re only going to talk” if North Korea comes to the table ready to give its nuclear and missile weapons program. He indicated there that the only condition would be for the regime to signal it wants talks and to have a “period of quiet,” where it does not test a nuclear or missile device.

However, spokespersons of the White House National Security Council and the U.S. Department of State undercut his remarks the day after, adhering to its usual hard-line stance on the North and stating there was no change in its policy toward the regime.

Tillerson’s address to the Security Council appears to have diverged from his initial prepared comments distributed by the State Department to reporters, which also included a line that said, “Apart from that step, there are no preconditions for talks, nor will we accept preconditions from North Korea or others.”

Steve Goldstein, the U.S. State Department’s undersecretary of public affairs, was quoted by CNN as saying that “nobody took that out for him,” on the omission of the line, adding that Tillerson “doesn’t speak word for word from prepared remarks and works to deliver the words that will be the most impactful to the audience he is addressing.”

“With respect to the talks ... we are not going to accept preconditions,” Tillerson said in a press conference afterward when asked by a reporter to clarify the preconditions, if any, for talks with the North.

“We do not accept a freeze-for-freeze as a precondition to talks,” Tillerson said, diverting attention to an initiative by China and Russia, which proposes a halt on North Korea’s nuclear and missile programs in exchange for a suspension of U.S. and South Korean joint military exercises as a first step to return to negotiations, which Washington has rejected before.

He added that the United States will not “accept any relaxing of the sanctions” nor “a resumption of humanitarian assistance as a precondition of talks.”

U.S. President Donald Trump’s “policy on North Korea is quite clear,” said Tillerson, adding “there is no daylight at all between the president’s policy and the pursuit of that policy.”

When he took office, Trump identified North Korea as the greatest threat to U.S. national security, and 11 months later, not much has changed, he said, adding, “If anything, the situation perhaps has worsened,” especially in light of the North’s most recent intercontinental ballistic missile (ICBM) launch on Nov. 29.

“We hope that this pressure campaign will cause North Korea to alter its course,” said Tillerson, and enable it to re-examine “whether it is possible for them to even sustain an economy if they continue the path they’re on.”

Trump on Friday critiqued Moscow, telling reporters, “China is helping. Russia is not helping. We’d like to have Russia’s help,” especially pointing to Russia’s practice of hiring North Korean laborers. Trump held a phone conversation with Russian President Vladimir Putin Thursday, with North Korea as a main subject of conversation.

In addition to urging countries to increase unilateral actions on the North, during his address at the Security Council, Tillerson called out Moscow and Beijing to crank up pressure on the regime. He went on to question their “commitment” to peace and security, noting the issues of North Korean laborers being allowed “to toil in slave-like conditions inside Russia in exchange for wages used to fund nuclear weapons programs” and China’s shipment of crude oil to the regime.

“We have been clear that all options remain on the table in the defense of our nation, but we do not seek, nor do we want, war with North Korea,” Tillerson underscored, but added that the United States “will use all necessary measures to defend itself against North Korean aggression,” though it hopes for a diplomatic resolution.