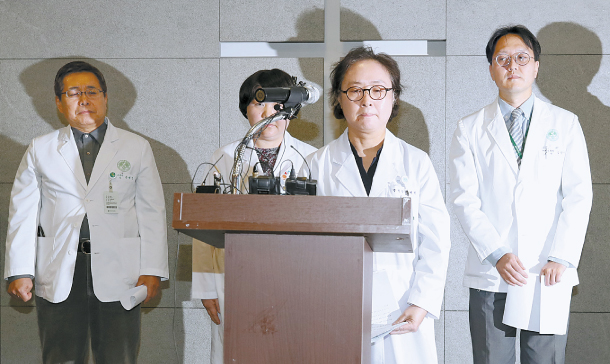 Chung Hye-won, director of the department of obstetrics and gynecology at the Ewha Womans University Medical Center in western Seoul, apologizes in a press briefing at the hospital on Sunday for the deaths of four newborn babies at the hospital on Saturday night. [YONHAP]

Four newborn babies died within a two-hour span at Ewha Womans University Medical Center in Seoul on Saturday night. Authorities are investigating the cause.

“We apologize to the relatives of the babies and to everyone in this country,” said Chung Hye-won, director of the department of obstetrics and gynecology at the hospital, in a press briefing at the hospital on Sunday. “Four babies being treated at the intensive care unit for the newborns at the hospital suffered sudden cardiac arrest at differing times, starting from around 5:40 p.m. on Saturday.

“We tried to revive the babies through CPR but could not,” she said. “The hospital is working with public health centers and authorities to find out the cause of their deaths. We apologize again to the relatives for this unfortunate and rare incident and promise to do our best to find out the cause behind it.”

Authorities requested the National Forensic Service conduct autopsies on the four dead infants to find out the cause of their deaths. The autopsies are scheduled to be held Monday morning.

The public health center of Yangcheon District, western Seoul, where the hospital is located, began an epidemiological investigation of the deaths Sunday morning.

Some of the possibilities for the deaths being discussed by some experts include lung conditions, necrotizing enterocolitis - an intestinal infection that is known to be fatal to prematurely-born infants - bacterial infection at the intensive care unit, or failure of medical equipment at the unit.

All four infants were born prematurely and were being treated at the intensive care unit for underlying illnesses, the hospital said.

Three more infants suffered heart attacks and were not revived by CPR.

There were 16 newborns being treated at the hospital’s intensive care unit for the newborns on Saturday afternoon.

After these deaths, eight out of the 12 other infants in the intensive care unit were sent to other hospitals and four were discharged.

“This was a precautionary measure in case there is something wrong with the intensive care unit for newborns at the hospital,” said Kim Han-soo, head of the public relations office of the hospital in the press briefing.

One of the parents called the police around 11 p.m. Saturday, the hospital said, saying there is something “suspicious going on at the hospital where four babies had to receive CPR.”

Some relatives of the dead complained that the hospital had not explained the details of what really happened at the intensive care unit before it briefed the press.