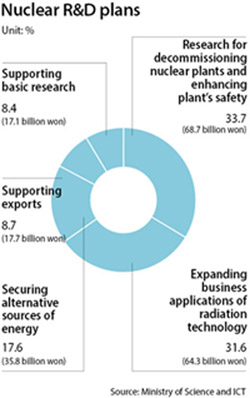 The Moon Jae-in administration is investing 203.6 billion won ($187.2 million) into research and development of the nuclear energy sector, with a special focus on enhancing the safety of nuclear plant operations and securing the technology required to decommission nuclear facilities.

While past administrations sought to benefit economically from nuclear energy development, the announcement from the Ministry of Science and ICT reflects the current administration’s push toward denuclearization.

According to the Science Ministry, about one-third of the 203.6 billion won budget will be spent on enhancing the safety of existing nuclear plants, such as upgrading facilities to be more disaster-proof, as well as securing core technologies required for plant decommissioning. It plans to cooperate with the Ministry of Trade, Industry and Energy to complete the development of 96 core technologies for nuclear plant decommissioning by 2021.

The ministry also hopes to expand the application of radiation technology in various sectors such as medical and bio technology. To bolster research, the government will designate the Korea Institute of Radiological and Medical Sciences as a research-centric hospital for the effective application of radiation technology in the medical sciences. Other industries where the technology could be applied include aerospace, national defense and the environment, the Science Ministry said in a statement.

The investment will also be used to beef up exports of nuclear energy-related technologies. Based on past experience in exporting small and medium-sized nuclear reactors, the government is in talks with overseas markets to export Korean nuclear fuel, incident response robots and more.

Lee Jin-gyu, the first vice minister of the Science Ministry, has been discussing exports with countries in the Middle East including Saudi Arabia, Jordan and the United Arab Emirates since earlier this month, according to the ministry.

In the longer-term, the Korean government hopes to discover alternative sources of energy such as nuclear fusion.

As the focus of nuclear R&D goals shift from promoting nuclear power generation to safer denuclearization, there will be an organizational overhaul of the government institutions in charge of nuclear energy R&D.

The government-run Korea Atomic Energy Research Institute will be reformed to focus on reinforcing the basic technologies related to nuclear power generation. The government will also launch a program to nurture experts in nuclear safety in partnership with universities.

“The strategies were formed to align nuclear R&D with the government’s energy policy,” Lee said. “We need to actively prepare for the future by shifting our paradigm in nuclear R&D in the direction of securing safety-related technologies and broadening the application of the nuclear technologies we already have,” he added.

According to the Science Ministry, the strategy was crafted based on discussions and a review by researchers from business, academia and research institutes.