LG U+ partners with Naver on AI and speaker

LG U+ partners with Naver on AI and speaker 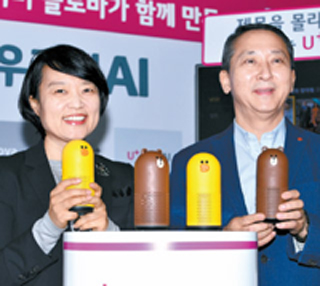 LG U+ teamed up with Naver in its bid to win a share of the fast growing artificial intelligence market dominated by competitors SK Telecom and KT.

Under the partnership the two companies jointly introduced the so-called “U+ Home AI” on Monday at a press briefing held at LG U+ headquarters in Yongsan District, central Seoul. The AI is based on Naver’s Clova platform and incorporates all of the home media services from LG U+. A newly released smart speaker, the “Friends+,” will run the new U+ Home AI.

To use all the features of U+ Home AI, customers need to have an LG U+ IPTV set-top box and Friends+ speaker. New customers that purchase an LG U+ set-top box before the end of January will get one of the smart speakers for free. With only the set-top box users will still be able to search by voice command, but other functions including shopping and controlling IoT devices only work with the speaker.

The unique feature of U+ Home AI is that it can suggest a list of movies based on keywords. For example, when the user asks the AI speaker to “Find me movies that will make me cry,” the IPTV immediately shows a list of sad movies including “Miracle in Cell No. 7” and “A Moment to Remember.”

Naver’s search engine service is also included in the U+ Home AI. When searching for tyrannosaurus, for example, users can not only hear the search result from the speaker but also see photos of a tyrannosaurus on their TVs right away.

The carrier has also partnered with retailers LG Household and Health Care and GS Fresh to enable direct shopping by voice command. By registering a card prior to shopping, customers can make purchases after a simple verification through spoken passwords.

LG U+ had been eager to find a breakthrough after SK Telecom released its AI assistant Nugu last year and KT jumped into the market with its GiGA Genie speakers earlier this year.

“I was deeply concerned as we were the late mover,” said Kwon Young-soo, CEO and vice chairman of LG U+. “But with Naver at our side we aim to become the leader in the fast-growing smart home market.”

Naver is also technically a competitor, as it has already rolled out two voice-activated AI speakers dubbed WAVE and Friends.

However, Kwon said, “Companies need to be flexible to effectively respond to the fourth industrial revolution,” and added it is “necessary” to cooperate when there is a good partner. While industry insiders expect the partnership to give LG U+ the edge it needs to make its way into the highly competitive market, some stress that to survive the carrier really needs to develop its own competency in AI technology.

“We have our own AI platform and we are still working on it,” Kwon said. “But I have to admit that there is still a big gap in AI capabilities between Naver and us.”

On Monday, LG U+ also introduced its own branded smart speaker as well, but didn’t give many details about the device, saying they wanted to focus on the Friends+ as the main AI assistant. According to Kwon, Naver’s device received better reviews during testing prior to the launch.