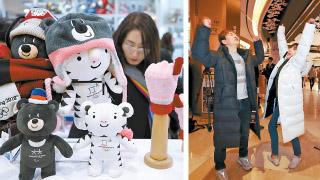 Nowadays it’s not uncommon to meet people wearing clothes emblazoned with “Passion Connected.” That’s the slogan of the PyeongChang Winter Olympics kicking off in February next year.

The popularity of the “Passion Connected” brand is most evident in the sales of the bench coat, dubbed the “PyeongChang long padding,” once the most searched term on top search engine Naver.

The coat was sold by Lotte, who won a licensing deal from the Winter Olympics organizing committee.

The bench coat proved popular not only due to the brand, but also the relatively cheap price compared to similar products on the market, at 149,000 won ($137), and its high quality. Crowds were willing to camp out at Lotte Department Stores across the country to be in with a chance of buying the garment.

The 50,000 won PyeongChang leather sneakers were the next big thing. As many as 200,000 pairs of sneakers were reserved in just a week after they went on sale on Dec. 1.

Lotte is hoping to hoping to continue its success into the new year, launching PyeongChang branded backpacks just before the Winter Olympics kicks off.

Lotte won the licensing rights for PyeongChang Olympics merchandise in March last year after agreeing a sponsorship deal worth 60 billion won for the PyeongChang Olympics as well as the Paralympic Games and the Korea Ski Association. Since then Lotte Department Store has created a task force that are behind the hugely successful bench coat and sneakers. The retailer was able to make 4.5 billion won in revenue from the bench coat and is hoping to double that figure with the sneakers.

“Through aggressive marketing, we hope that our group will be known worldwide even after the Olympics,” said a Lotte Group official.

As companies are competitively marketing the Winter Olympics, those that aren’t official sponsors of the event are resorting to so-called ambush marketing, or indirect advertising and promotion.

The winter games official sponsor in telecommunications is KT and the outdoor sports brand is Youngone Outdoor.

There are 13 companies registered as Olympic partners. The International Olympics Committee only select one company in each area, including Samsung Electronics in wireless telecommunication, Coca Cola for beverages, Omega for timekeeping and Toyota as the official vehicle.

KT and Youngone Outdoor are in the top category as official partners.

Ambush marketing has been a struggle at almost every international sporting event.

During the 1984 LA Summer Olympics, Nike ran an ad featuring athletes with the Randy Newman song “I Love L.A.” in the background. As a result, nearly half of Americans at the time thought Nike was the official sponsor of the games. In reality, it was Converse.

“Olympics related marketing has helped further raise the interest in the PyeongChang Olympics,” said Cho Seong-sik, a professor at Hanyang University. “There’s a need to work on protecting the rights of the sponsors and expanding Olympic related industries in the long term.”