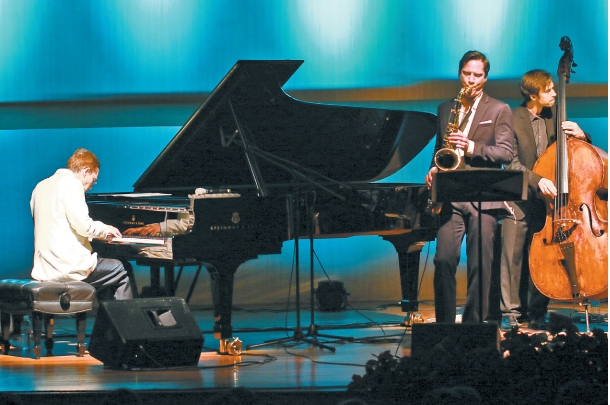 American jazz pianist Ronn Branton’s Jazz Christmas Concert will be held twice on Dec. 24 at the Sejong Center for the Performing Arts in central Seoul. This year is Branton’s 17th Christmas concert in Seoul. [MUSICAL PARK]

Christmas is just around the corner and already one can hear the dulcet tones of Christmas carols suffusing the air over streets that lie otherwise still, except perhaps for the sound of snow crunching under passing boots.

Christmastide is beloved by many Koreans, so the dearth of live concerts featuring carols this year is surprising.

That’s why the American jazz pianist Ronn Branton started his own Christmas show here 17 years ago and still continues to perform jazzy carol tunes onstage every Christmas in Seoul.

“I started this gig back in 2001, because when I moved over here,” Branton says, “I noticed that people, Koreans and especially expats who can’t go back home, don’t really have things to do for Christmas. I remember also, as a foreigner, Christmas in Seoul as just a dead gray December. People might go out and eat, or go to a church, but there was no Christmas in their hearts, in my perspective. So I wanted to create this jazzy Christmas gig so I can celebrate Christmas and invite other people to join in.”

Branton says he always works to make the show different each year.

“A part of the Christmas deal for me is to create new and interesting arrangements of the carols people are familiar with,” he says, and this is why he believes his concert has become a regular Christmas event for some.

This year, he’ll be onstage with Richard Rho on saxophone, Sean Pentland on double bass and Manuel Weyand on drums.

“I try to make some of the carols I play often as different as I can,” he says. “I don’t want to pull out the same arrangements each year. My goal is to provide quality music that is also fun for Christmas.”

Although Branton says he avoids playing the same carols every year, there is one all-time favorite he plays every year: “Jingle Bells.”

“I just love that piece,” Branton said. “It gets funkier each year and I hope people can really stand up and even dance onstage.”

This year’s show will be held at the M Theater of the Sejong Center for the Performing Arts in central Seoul. The program for this year’s concert, which will be held twice on Christmas Eve - at 5 p.m. and at 8 p.m. - lists “Jingle Bells,” “O Holy Night,” “Silent Night Holy Night,” “White Christmas” and a few not so familiar tunes, including “Skating” - all of which have been arranged by Branton and his band in fresh ways.