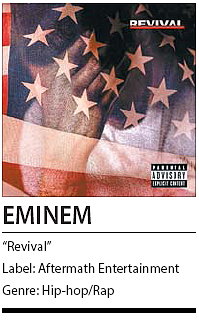 The A-List collaborators on Eminem’s new album scream “I want a radio hit,’’ with Beyonce, Ed Sheeran and Alicia Keys making an appearance.

It wouldn’t be hard to believe, especially since Eminem’s last major hits have relied heavily on Rihanna, from “Love the Way You Lie’’ to “The Monster.’’ But thankfully on “Revival,’’ Eminem returns as the star of his show.

Beyonce sounds beautiful on opener “Walk On Water,’’ but Em’s words are even better, as he delivers honest lyrics that sound, and feel, true to him.

Eminem is no longer hip-hop’s most prized wordsmith and the adjustment is tough for any performer once known as one of music’s most celebrated acts.

But on “Revival,’’ his ninth studio album, Eminem makes himself relevant with his smart rhymes, which is refreshing in the age of “mumble rap.’’ The album artwork is of the American flag, with race and President Donald Trump as recurring topics throughout the 19 tracks.

Overall, “Revival’’ is solid. It isn’t Eminem’s best album, but it does showcase some of his growth.