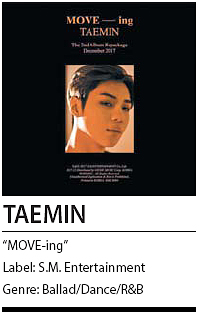 “MOVE-ing” is a repackaged version of singer Taemin’s second album “MOVE,” adding four new tracks to the original nine. The repackaged album was released on Dec. 10.

The new title track “Day and Night” is a medium-tempo pop song featuring a classical guitar and cello melody. The soothing lyrics stick to the listener’s minds while the addictive melody keeps one humming along to the music.

The singer participated in composing and writing the lyrics of the song, which is about how one keeps on missing their former lover long after they have broken up, describing the lover as “a cold that cannot be cured.”

The album’s title track “MOVE-ing” highlights the artist’s new music and performance from his second album “MOVE,” and also the ambiguous phrase “to present music that can move the listener’s hearts.” The artist received attention from the public and the media for his unique and dreamlike performance in the music video for “MOVE.”