An Hee-Jung says he will not seek re-election

An Hee-Jung says he will not seek re-election 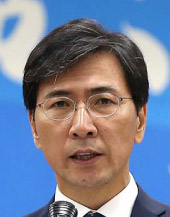 South Chungcheong Governor An Hee-jung, a high-profile politician of the Democratic Party with presidential ambitions, said Monday he will not seek re-election next year.

“I will smoothly wrap up my eight years as governor by June and will not run for a third term,” An said in a press conference at the provincial government building. “I believe it is right to allow an opportunity for new challengers.”

An said he will do his best to conclude his tenure with success and arrange a smooth transition.

Asked about his future plans, An made clear that he will not run in the upcoming legislative by-election. Some believe he may run for a major district in the by-election, which takes place in time with the local election in June.

An, 52, is a liberal politician with strong ties to the late President Roh Moo-hyun. He was elected as South Chungcheong governor in 2010 and re-elected in 2014.

“I am a politician who ran in the presidential primary and I do not forget that the residents of the province still have hopes for me,” An said. “I will discuss my political career plan more specifically when I complete my term.”

The decision to skip the local election and legislative by-election is in contrast with other presidential contenders from the Democratic Party. Seoul Mayor Park Won-soon is reportedly seeking a third term and Seongnam Mayor Lee Jae-myung is expected to run for Gyeonggi governor.

An and Lee ran in the Democratic Party’s presidential primary and were defeated by President Moon Jae-in.

An may run for the Democratic Party chairmanship. The election is scheduled for August next year.

“An completed the presidential primary in second place,” a lawmaker close to An said. “As a prominent presidential contender, he will seriously consider running to become party chairman, because it is a post with significant power to make nominations for the next general election.”

While An made up his mind to end his career as South Chungcheong governor, four-term lawmaker Yang Seung-jo and Blue House spokesman Park Soo-hyun are preparing their bids, sources said.