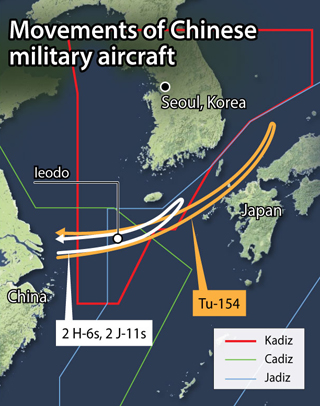 The Korean Joint Chiefs of Staff (JCS) announced that at around 10:10 a.m. Monday, five Chinese military planes were detected entering the Kadiz from southwest of Ieodo, underwater reefs located south of Jeju Island controlled by Korea that belong in waters that both Seoul and Beijing claim.

As the Chinese military aircraft approached the Kadiz around 10:02 a.m., the Korean Air Force dispatched F-15K and KF-16 fighters in an emergency sortie.

The JCS said that the Korean fighters identified the Chinese military aircraft and continued surveillance until they left the Kadiz.

The South Korean military confirmed through the Air Force’s Master Control and Reporting Center that the planes were Chinese military aircraft.

All aircraft had returned to China’s ADIZ by around 1:47 p.m.

“We contacted the Chinese side through our hotline and they said they had been conducting regular [military] exercises,” a JCS official told reporters. “We are in the process of analyzing the Chinese military’s exact intentions.”

The Chinese military aircraft breached an area where the air defense identification zones of Korea, China and Japan overlap.

Korea in turn announced its expanded ADIZ on Dec. 8, 2013 to cover its remote islands and Ieodo after consulting with the United States, China and Japan. ADIZ aren’t subject to international treaties or agreements and are larger than traditional national air spaces.

Ieodo, as submerged reefs, cannot be considered disputed territory, though Korea and China’s exclusive economic zones overlap at that point.

“Because the Korea-China summit was just held, it doesn’t seem like China held the drills targeting Korea,” said Park Byung-kwang, a senior researcher with the Seoul-based Institute for National Security Strategy. “It appears that China’s goal was to reconfirm its ADIZ and conduct reconnaissance of Japan.”

A dozen Chinese planes entered the Kadiz near Ieodo on Jan. 9, which prompted Korea to scramble 10 fighters.