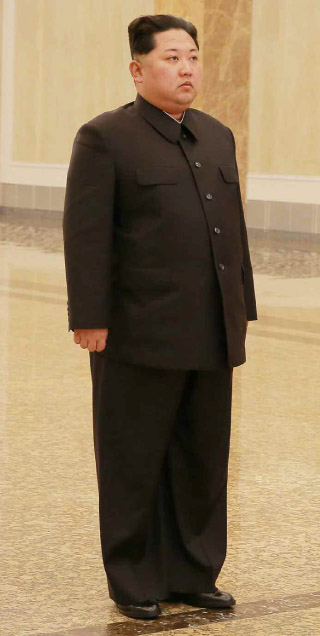 The visit was made on Sunday, the day Kim Jong-il died in 2011, but the Korean Central News Agency (KCNA) did not report it until a day afterward. And Kim Jong-un was alone, without his usual pack of trusted aides.

According to North Korea watchers here, Kim Jong-un could be trying to stay low-key amidst possible U.S. attacks, especially after he claimed last week that his country has mastered its nuclear development program.

Or it could be that Kim was preparing for another military threat, perhaps a long-range missile test, and appeared at the mausoleum late on Sunday, leaving no other choice but for the KCNA to wait until dawn.

Such visits to the Kumsusan Palace of the Sun are usually made on special occasions, often on New Year’s Day or the birthdays and funeral anniversaries of Kim Jong-il and Kim Il Sung. Kim Jong-un’s visits to Kumsusan were a rare exception to North Korean state media’s customary protocol of reporting his activities a day after they occur.

But it was not so this time. The KCNA reported Monday that Kim visited Kumsusan the day before to mark the “greatest national memorial day,” adding that he made a deep bow to Kim Jong-il and paid homage to the statues of his father and grandfather.

“He [Kim Jong-un] made a solemn pledge to struggle more vigorously as befits a revolutionary soldier of Kim Jong-il,” an English version of the KCNA report read, “and further consolidate the country in the strong one where Kim Jong-il’s lifelong desires have come true into the fortress independent in politics, self-supporting in the economy and self-reliant in defense.”

A former high-level official at the Unification Ministry said KCNA could have reported on its leader’s whereabouts a day later due to growing threats from the United States, which has not shied from mentioning a military option on the regime.

“Kim Jong-un could be preparing to carry out a military threat at any time in an ultimate face-off against Washington,” said a former intelligence official. “He could’ve inspected a long-range missile site ahead of the Kumsusan visit and appeared late due to weather conditions.”

On why Kim was not shown with his usual entourage, Jung Chang-hyun, a North Korea expert who heads a modern history research center in the South, said it appeared Kim was trying to show that he could “stand on his own.”