Kim Si-woo trains his sights on the year ahead

Kim Si-woo trains his sights on the year ahead

Kim Si-woo revealed his goals for another season on the PGA Tour - defending The Players titles, playing with Tiger Woods, competing at the Tour Championship, playing a season without a back injury and getting inside the top 10 on the Rolex world ranking. 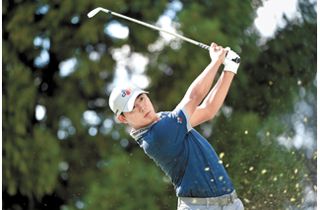 “I watched Woods’ return tournament and he seemed to be in a better condition than he was before,” Kim said. “He still had a quick swing and didn’t seem to have a problem so I’m excited to see him return. If I get paired with Woods in the PGA Tour’s top tournaments like The Players Championship and win, it’ll be an unforgettable memory.”

Regularly in interviews, Kim continuously mentioned that playing with his idol, Woods, has always been his dream. From a successful return at the Hero World Challenge, finishing tied for ninth, Kim believes that his dream is now closer to becoming a reality.

“Since I’ll be the defending champion at the 2018 The Players Championship, I’ll probably be paired in a group with good players,” Kim said. “So there may be a chance of me playing in a group with Woods.”

Kim also hopes to play the 2017-18 season without a back injury.

Though he became the youngest golfer to win the 2017 The Players Championship at age 21, the second half of the season was a disappointment, as he suffered from a back injury.

“I’ve been focusing on strengthening my back through exercise,” Kim said. “I’m at a level where I don’t have to worry about my back when swinging a club. But I’ll be careful and closely check.”

Having to withdraw and miss cuts in the number of tournaments, Kim wasn’t able to compete at the Tour Championship, the PGA Tour’s season finale, where only the top 30 players in the FedEx Cup points ranking are invited to play. Kim played in the 2016 Tour Championship.

Kim is currently ranked 42nd in the World Ranking, the highest among Korean golfers. As Kim reached his highest ranking of 28th after the victory at The Players Championship, dropping more than 10 spots is quite a disappointment.

“The top ten golfers in the world ranking is probably the group with the best golfers,” Kim said. “I want to be in that group, so I want to develop one step further.”

Kim hopes to move his way up, just like the Japanese golfer Hideki Matsuyama, the fifth-ranked player in the world.

“I played with him last season and he is a very competitive player,” Kim said. “I learned a lot of short game.”

To get within the top 10, Kim is well aware of what he needs to improve on.

“Distance and putting are the most important,” Kim said. “I’ll need to gain about 10 yards in distance and need to improve my putting to become the world’s top golfer.”

In addition to mechanics, Kim emphasized the importance of strong mentality and decision-making.

“You need to be in a great condition to win big tournaments,” Kim said. “You need your bio-rhythm ready for major tournaments. My routine is to skip the tournament [scheduled right before the major tournament] and get to the course earlier to practice.”

Kim has won two PGA Tour events. Even before his first PGA Tour victory, Kim received attention by being the youngest player to earn PGA Tour status at age 17, through the 2012 PGA Tour Qualifying School. Then he became the youngest Korean golfer to win a PGA tournament, the Wyndham Championship, at age 21.