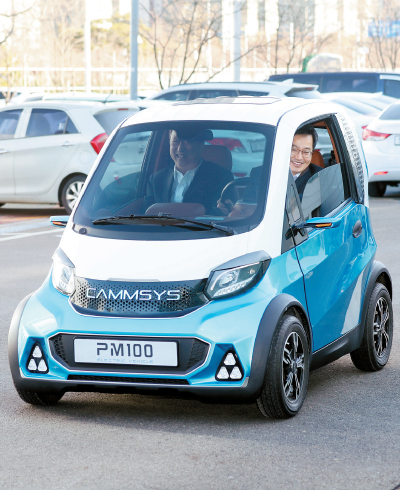 Korean Finance Minister Kim Dong-yeon, right, and Korea Chamber of Commerce and Industry chairman Park Yong-man, left, test an electric vehicle while visiting the office of Cammsys, a local electric vehicle parts maker, on Tuesday in Incheon. During a meeting with executives of the company, Kim, who also doubles as deputy prime minister for the economy, said the government will create a 10 trillion won ($9.2 billion) fund in order to support small- and mid-sized companies with innovative technologies. The pool of money is part of a government plan announced last month to pour in as much as 30 trillion won over the next three years to foster innovative start-ups and mid-sized companies in Korea. During the visit, Kim also stressed the necessity of mutual cooperation between conglomerates and smaller companies, while vowing the government will further increase its effort to deregulate to promote innovation. [YONHAP]