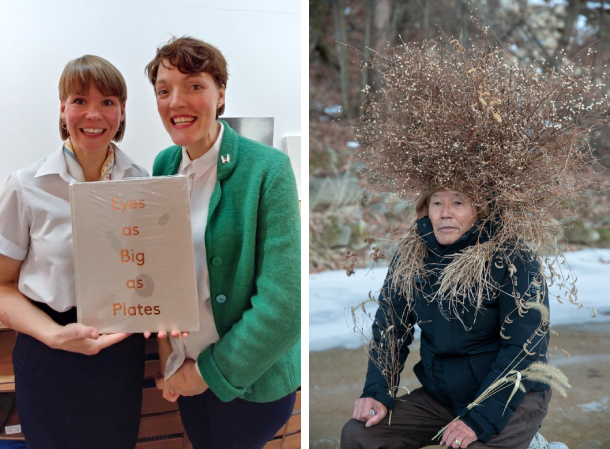 Left: Finnish-Norwegian artist duo Riitta Ikonen, left, and Karoline Hjorth, right, pose after an interview with Yonhap on Dec. 8. Right: One of the photos that the artist duo took in Pyeongchang, Gangwon, for their “Eyes as Big as Plates” photo series. [WWW.EYESASBIGASPLATES.COM, YONHAP]

When the Finnish-Norwegian artist duo Riitta Ikonen and Karoline Hjorth visited Pyeongchang, the host city of the upcoming Winter Olympics, the two didn’t know what to expect.

The thrill of unexpectedness, they said in unison, is exactly what has driven the two adventurous ladies to keep venturing out and exploring unknown places around the globe.

The two met in 2011 when Ikonen found a residency opportunity in Norway. She looked up three keywords online: Norway, grannies and photographer. Then Hjorth’s name was the first one to appear on the search results.

Hjorth had just finished a book about Norwegian grandmothers - a subject that had fascinated her for a long time.

“Like Korea, men are having the focus in Norway. I was curious to portray Norwegian women, especially the old ones. I started with mine, a typical grandmother. She serves you cakes and hugs you. But you don’t really know who she is,” she said.

“We don’t know who we’re going to meet, how the weather will be like. We don’t know anything. And that is so fun.” said Ikonen in a recent interview with Yonhap News Agency. “And the collaboration! I know I can do. You know you can do. But together? We can get to places where we have no idea. Unexpected things happen. That’s good.”

The two fearless artists started a project called “Eyes as Big as Plates,” a photography series to document people in their most natural and honest looks by making them wearing sculptures made of things gathered from the local landscape.

They are one of the four artist teams who have taken part in an on-going public art project on display in the overpass-turned-park Seoullo 7017, the city’s new landmark, to celebrate the Winter Games and connect Seoul and Pyeongchang, some 180 kilometers (113 miles) east of the capital city. For the Korean edition of the project, the two visited the alpine city twice - the summer of 2016 and this month. There, they got to meet many locals and chose five people as their subjects.

The experience with the local people in Pyeongchang was “epic,” said Hjorth.

“Just their life stories were amazing. Despite what they have gone through in the past, they were so content with the situation they are in now,” she added.

Ikonen chipped in: “They are very connected to now. There are so much they can hang on to and feel bitter and sad about. But they were like, ‘Life is now good. Let’s make the most of it.’ They count their blessings and really see what is good about the situation and focus on that... Counting on what makes it worth waking up every day. We were so moved by many of the stories.”

The two joined in a 2014 group exhibition in Seoul - their first adventure in the country - when they shipped their work and didn’t physically attend. After what Ikonen called a “once in a lifetime” experience in Pyeongchang, they wish to come back for more.

“I would love to photograph haenyeo. There are so much to explore in this country,” Hjorth said, referring to Korean women divers, listed as UNESCO’s intangible heritage and found mostly on the southern resort island of Jeju.

Through this exhibition, Ikonen wants to tell the audience, “Be true to what you want to do. Don’t let all sorts of unnecessary things get in the way of what actually matters. It is all about connection, collaboration and people. Everything will work out. Focus on your community.”