Fans and entertainment industry in shock after death of Jonghyun

Fans and entertainment industry in shock after death of Jonghyun 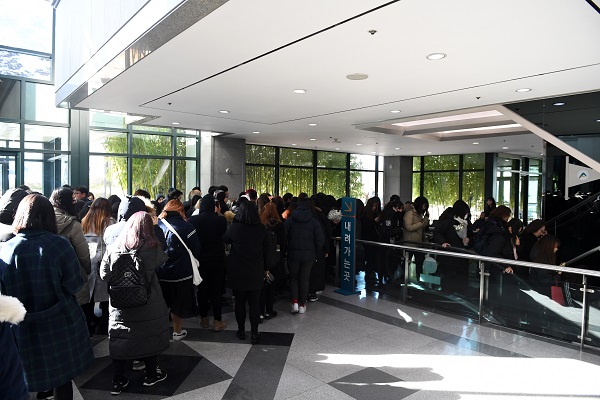 Fans visit the Asan Medical Center in southern Seoul where a funeral ceremony for Jonghyun is being held. [YONHAP]

The death of Jonghyun, member of boy band SHINee, on Monday, has left the entertainment industry and fans both in Korea and around the world in shock.

The 27-year-old star, whose real name is Kim Jong-hyun, died Monday in what police have ruled a suicide. He was found unconscious at an extended-stay hotel in Cheongdam-dong, Gangnam District in southern Seoul, and was moved to a nearby hospital, where he was pronounced dead.

The police decided that the circumstances pointed to a suicide and chose not to do an autopsy, honoring the wishes of the singer’s family.
“I’m malfunctioning from inside,” wrote Kim in a note given to his friend, vocalist Nine9 of the group Dear Cloud. She shared the note on Instagram saying that Kim wanted the note to be publicly posted if he ever took his own life.

She mentioned that Kim had recently started to share some private stories with her which made her nervous. She said she discussed the situation with Kim’s family and they all decided to post his note online as he wished.

He sent a text message to his older sister around 4:42 p.m. on Monday that he had been struggling and he wanted to be let go. His sister sensed the possibility that the singer may harm himself, so she called the police immediately. The police searched the neighborhood, and eventually found Kim. The hospital confirmed his death at 6:32 p.m.

The funeral is being held at Asan Medical Center in Songpa District, southern Seoul. The four other members of SHINee — Key, Taemin, Minho, Onew — are at the funeral home receiving family and friends. SM Entertainment, the group’s agency, has set up a separate place in the hospital for fans so that they can honor the deceased.

On Tuesday afternoon, Jonghyun’s song “Lonely,” featuring Taeyeon of Girls’ Generation, sat atop many of the local music streaming charts.

“SHINee members as well as the other artists and staff at SM Entertainment are in shock and mourning [Kim],” said the agency in a release.

“Jonghyun was an artist who loved music more than anyone else and did his best [while performing.] It is hurtful to deliver sad news to his fans who have loved him endlessly.”

Kim, who made his debut as part of the five-member boy group in 2008, was recently transforming himself into more of a singer-songwriter than a pop star. Alongside his work with the group, he has also released solo records since 2015. For his first solo EP “Base,” he composed and wrote the lyrics to all of the songs to signal that he was trying to evolve.

He also worked as a radio DJ for about three years, and introduced many indie musicians through his show. Nine9 of Dear Cloud built a friendship with Kim after appearing frequently as a panelist on the singer’s radio program.

Kim performed as recently as Dec. 9 and 10, when he held “Jonghyun Solo Concert Inspired” at Seoul Olympic Park in Songpa District, southern Seoul. Fans who attended the concert reported that Kim performed just as passionately as he always had.

SHINee captured local attention with its debut song “Noona, You Are So Pretty,” and grew to the level of other K-pop stars with international popularity like TVXQ and BoA.

Their single “Lucifer” off of their second album, as well as “Dream Girl” and “Why So Serious” from their third album, ignited the group’s popularity worldwide.

The group frequently traveled across Asia, as well as to Europe and America, while also catering to fans in Korea.

Kim recently filmed an appearance on the JTBC entertainment program “Night Goblin,” which was originally scheduled to air on Sunday. The channel has not decided whether to release the episode as planned.