Bitcoin boom has other coins rising even faster

Bitcoin boom has other coins rising even faster 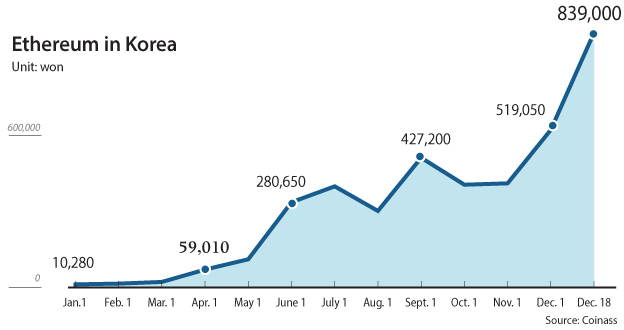 The explosive rise of bitcoin is generating a ripple effect in Korea that’s expanding far beyond the cryptocurrency market.

Not only has the bitcoin boom raised the value of so-called altcoin - cryptocurrencies other than bitcoin - but it has also pushed up the share price of local companies that are closely involved in cryptocurrency trading.

Bitcoin started the year trading at around 1.2 million won ($1,104) in Korea, according to Coinass, a Korean cryptocurrency information provider.

This scale of growth, though, is nothing compared to the price increases of altcoins. Ethereum, developed by Vitalik Buterin, a Russian-Canadian programmer, was being traded in Korea at around 14,000 won in January.

It quickly gained ground by mid-year. In early May, it was selling at around 90,000 won, and by the end of the month, the value more than doubled, rising above 200,000 won.

Throughout the next few months, Ethereum ebbed and flowed, going over 400,000 won at one point and falling below 200,000 won at another. By the end of November, the price settled at around 500,000 won.

But following the rise of bitcoin, Ethereum’s price jumped in the first weeks of December. By Monday, ethereum was going for 840,000 won in the Korean market. In the span of a year, Ethereum’s value had skyrocketed by more than 70 times.

“Korea has become the largest player in the world for Ethereum,” said Han Dae-hoon, an analyst at Shinhan Investment. The global market “is now being led by Korean investors.”

Other altcoins are experiencing a similar trend. According to CoinMarketCap, Bithumb, Korea’s largest cryptocurrency exchange, is responsible for over 30 percent of the global trading volume for Ripple and 50 percent for Qtum.

“Altcoins became especially popular in Korea because of the low barrier to entry,” one analyst said. “The cryptocurrency fever in Korea really took off during the middle of the year, and by then, the price of bitcoin was already steep, so retail investors with lower capital chose more affordable options like Ethereum and Qtum.”

SCI Information Service, a Korean credit information service provider that is traded on the Kosdaq, opened Scoin, a cryptocurrency exchange, earlier this month. Afterward, its share price, which stood at around 1,000 won in November, catapulted to 7,250 won as of Tuesday.

Kosdaq-listed Omnitel, a mobile and broadcasting service provider that owns shares in BTCKorea.com, the operator of Bithumb, also saw its share price rise from around 5,000 won to over 10,000 won this month.

“Stocks of companies that are seen as involved in cryptocurrency trading have shown dramatic increases unrelated to their performance,” said an official from the Financial Supervisory Service, Korea’s financial watchdog.

“Reckless investment, however, could incur tremendous losses since their stock prices can fluctuate in accordance with the prices of cryptocurrencies.”