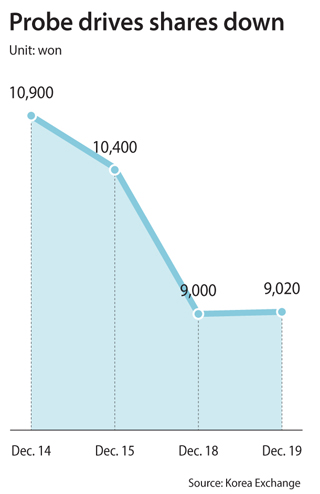 Mirae Asset Daewoo, a major brokerage firm in Korea that is seeking to obtain permission from the authorities to operate as a so-called mega investment bank, witnessed its share price plummet dramatically in the past couple of days after it was reported that the company is being probed over accusations of insider trading.

The company’s stock price took a blow after it was announced on Friday that it is under inquiry by the Fair Trade Commission for possible insider trading. The commission is currently investigating whether subsidiaries of Mirae Asset Group took lucrative profits from giving contracts to each other.

The announcement of the probe suspends the Financial Supervisory Service, the country’s financial watchdog, from screening the company to grant it permission to issue short-term financing notes. The brokerage arm of Mirae Asset Group applied for permission in July.

The move is seen as the company’s attempt to gain a license to handle investment management accounts (IMA), which deal with different financial instruments including bonds and promissory notes. To get permission to handle IMAs an investment bank requires at least 8 trillion won in capital. As of September, Mirae Asset Daewoo’s capital stood at 7.3 trillion won.

“Although the review of its promissory note issuance operation has been put on hold, the increased capital should allow the company to pursue new activities,” said Jung Jun-sup, an analyst from Yuanta Securities.

Still, experts think that the probe by the authorities had more impact on the company’s share price than the fundraising plan.

“We expect the legal uncertainty that stems from the investigation by the Fair Trade Commission to have a greater impact on the share price of the company than the benefit from the capital raise at this point,” said Kim Tae-hyun, an analyst from Kiwoon Securities. “While under investigation, receiving permission by the Financial Services Commission to issue promissory notes or handle investment management accounts is likely to be delayed.”

“The main reason behind the Fair Trade Commission’s investigation is because of the corporate governance of the company,” said an industry insider. “Mirae Asset Daewoo pushed for a capital raise and to obtain permission for IMAs without resolving a governance structure issue and it’s doubtful that the authorities will grant permission in such conditions.”