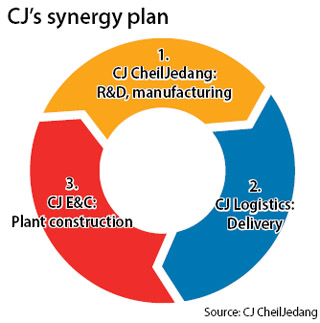 CJ CheilJedang, a processed food maker under the conglomerate CJ Group, acquired a share of CJ Logistics to become the majority stakeholder on Tuesday as part of a plan to use the logistics company’s resources for faster global expansion.

The food maker’s acquisition of an additional 20.1 percent in CJ Logistics brings its total stake to 40.2 percent, making CJ Logistics a wholly-owned subsidiary of CJ CheilJedang.

CJ CheilJedang’s acquisition of CJ Logistics was done through its subsidiary Youngwoo Frozen Foods, which bought KX Holdings, the company that owned the stake in CJ Logistics.

CJ CheilJedang and KX Holdings were each given 20.1 percent stakes in the company.

“We will take a quantum leap toward being a global life and culture company by maximizing synergy among the three companies,” CJ said in a statement.

The food maker is building a frozen food factory in China.

“It has become possible for CJ Logistics to advance into Latin America’s grain market through Selecta,” CJ CheilJedang said.

CJ Group’s chairman, Lee Jay-hyun, has been emphasizing overseas expansion through mergers and acquisitions. In a speech earlier this year, he pledged to invest 900 billion won ($828 million) in new facilities and M&As for CJ CheilJedang. The latest affiliate reshuffle reflects this ambition.

CJ Group said in a regulatory filing that it received 1.87 million shares of CJ CheilJedang on Tuesday which is worth 726.9 billion won in return for Youngwoo Frozen Foods’ merge with KX Holdings.