‘I know a bully when I see one, and Donald Trump is a bully’

‘I know a bully when I see one, and Donald Trump is a bully’ 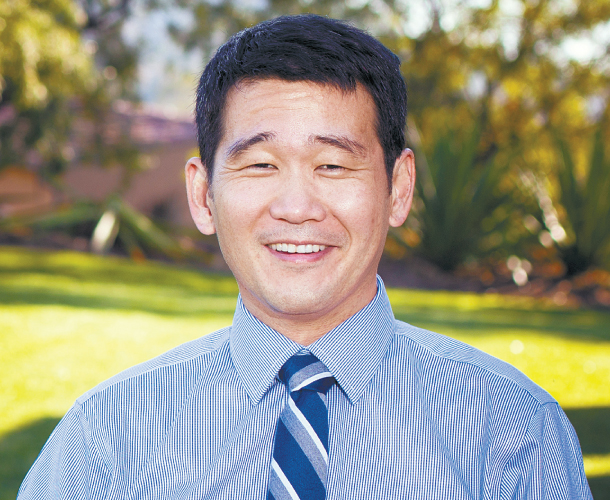 Dave Min, Professor of law at the University of California at Irvine

When Democrat Doug Jones won the Alabama Senate by-election on Dec. 12, the first time a Democrat has won in the Republican stronghold in 25 years, he raised the hopes of voters across the United States who disapprove of President Donald Trump’s policies.

As the divide between Republicans and Democrats continues to grow, the 2018 mid-term election are increasingly being looked to as a watershed moment for the Trump administration. With all 435 House of Representatives seats up for grabs, one second-generation Korean-American has decided to throw his hat into the ring.

Aiming to become the first Korean American to become a member of the House of Representatives since 1999, Dave Min, a professor of law at the University of California at Irvine, is competing with six other contenders in the party primary, due to take place in June next year, for California’s 45th district. Should he win the party nomination he will challenge two-term Republican Mimi Walters in November.

“A big part of the reason I am running for Congress is because of who I am and my experiences,” said Min in an email interview with the Korea JoongAng Daily, explaining what led him to the political realm. Recalling his own experience of being bullied as a minority, he said of U.S. President Trump: “I know a bully when I see one, and Donald Trump is a bully.”

Q. Can you explain how you were influenced during your upbringing by your parents, especially in light of the fact that they are Korean immigrants? How did their culture and values shape your view and personality? Did you face any difficulties growing up because you are from a minority group?

A. After graduating from Seoul National University, my parents came to the United States in 1972 for their graduate studies at Brown University. They both received their PhDs (doctorates) in 1976, my father in mechanical engineering and my mother in chemistry. I was born in 1976 and my brother in 1979.

Balancing Korean and American culture was not always easy, particularly with so few Koreans in my community. Because of my heritage, I have internalized the notion of respect for others (particularly elders), great pride in being Korean-American. At the same time, I know what it’s like to be bullied for being a minority, and I think I’ve developed a great sense of empathy for those who are downtrodden. A big part of the reason I am running for Congress is because of who I am and my experiences. I know a bully when I see one, and Donald Trump is a bully.

Can you explain your experience as a policy adviser to Senator Chuck Schumer? What made you move to Washington, rather than pursue a legal career, and step into the realm of politics? What did you learn, in terms of politics and the workings of Washington, from your time with Schumer?

After graduating from Harvard Law School in 2002, I began my career as an attorney at the Securities and Exchange Commission, where I worked to protect investors from fraud and abuse in the markets. I later transitioned over into a job working as a senior policy adviser for Senator Schumer on issues related to housing, economics, and banking regulation.

I learned a number of key lessons about politics from my time with Senator Schumer. Perhaps the most important one I learned is the importance of engaging with and listening to one’s constituents, even those who may disagree with you. Senator Schumer knew that as a Democrat, his core support was based in New York City.

But he still spent enormous amounts of time visiting with residents of upstate New York, to hear their concerns and to try to address them in terms of concrete legislation and action. A good leader doesn’t just try to help his supporters, but also tries to help those who didn’t vote for him.

What led you to run for Congress? And what do you hope to achieve as a Congressman?

I’m running for Congress because I care about my children and the future we are leaving behind for them. My campaign is based on what I call the “Dad Agenda.” I believe in long term investments in protecting our environment, improving the quality and affordability of our schools and colleges, fixing our crumbling infrastructure, creating jobs for the future, prioritizing scientific research, and reforming our health care system so that it works for everyone.

What aspects of President Trump’s policy direction do you most disapprove of? What are your thoughts on North-South Korea relations and U.S. North Korea policy?

What convinced me to enter the race was Trump’s Muslim ban. As the son of Korean immigrants, I think often about what brought my parents to this country — the core American values of tolerance, diversity, and the promise of economic opportunity and social mobility. The Muslim ban was un-American and I believe that it is an assault on what makes our country great.

I am also deeply concerned by the Trump administration’s very indifferent attitude towards diplomacy and the lives of South Koreans. While there may be legitimate reasons to be deeply concerned about North Korea’s development of long-range ballistic missiles and nuclear proliferation, we must take a thoughtful approach to addressing this problem, and war must only be a last resort, after we have exhausted all other options.

Unfortunately, Donald Trump’s approach appears to be reckless and thoughtless, and we have an unfortunate situation of two “madmen” facing each other down. South Korea is one of the closest allies of the United States, and we ought to be closely collaborating with the Moon Jae-in administration. Instead, it seems as if our Korean foreign policy is based on a reckless cowboy approach that does not serve anyone well.

If you are elected, you will be the second Korean-American elected to the U.S. House of Representative after Jay Kim, who represented California’s 41st district from 1993 to 1999. Have you sought advise or help from Mr. Kim? How do you feel about potentially setting a milestone for the Korean community in the United States?

I do not have contact information for Mr. Kim, but would be eager to get his advice. I have sought help from Sukhee Kang, the first Korean-American mayor of a major U.S. city (Irvine), and he has endorsed my campaign. I have also sought help and advice from Los Angeles City Councilman David Ryu, Virginia Delegate Mark Keam and former Boston City Councilman Sam Yoon.

How do you feel about your chances in next year’s Democratic primary? Considering the history of Republican representatives elected in the district, how confident are you that a Democrat can win the election next year?

My common sense, policy-based agenda is attracting the support of local elected officials and voters of all political persuasions. Although there is a crowded primary, I’ve already proven myself as the front-runner by clearing over 50 percent in two separate straw polls of 4 candidates held in May and November of 2017.

I’ve also been by far the most aggressive candidate as far as getting out there and meeting voters. I’ve held three town halls, over 50 house parties, and met over 15,000 voters in the district. Finally, I’m the only Asian-American candidate running in a district where 25 percent of the current voting age population is Asian American and Pacific Islander.

At the same time, the incumbent Republican Mimi Walters is very vulnerable. Hillary Clinton, a Democrat, won my district by 5.4 percent in last year’s presidential election. And Congresswoman Walters continues to do everything she can to alienate voters here in our district. She rarely appears in public here, and refuses to have public town halls to engage with voters.

Most recently, she was a key vote for the Republican tax bill, which targets California and raises taxes for most people in my district, all to help fund a tax cut for billionaires. As a result, she was the subject of a Wall Street journal article this past weekend featuring the many angry people here in our community that are outraged about her vote on this tax plan.