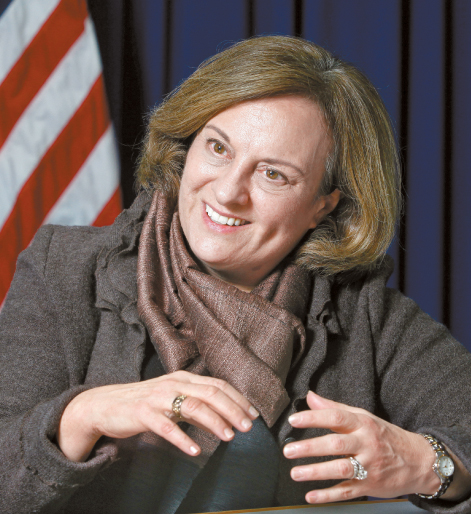 Suzanne Lawrence, special adviser for children’s issues at the U.S. Department of State, at the U.S. Embassy on Dec. 13, during her visit to Seoul to meet with stakeholders on international adoption and international parental child abduction. [PARK SANG-MOON]

The U.S. State Department supports the Adoptee Citizenship Act, which proposes to grant citizenship to adoptees in the United States who were not naturalized in time by their adoptive parents, said Suzanne Lawrence, special adviser for children’s issues at the State Department.

“The Adoptee Citizenship Act is a piece of legislation we were very encouraged by,” Lawrence told the Korea JoongAng Daily during her trip to Seoul to meet with stakeholders on international adoption. “In fact, the State Department gave some technical assistance to those who were drafting that legislation.”

She added, “The legislation has not yet been introduced and we hope that it will be introduced.”

The current law, the Child Citizen Act, passed in 2001, ensures that incoming adoptees automatically gain citizenship. But the law is not retroactive and does not grant citizenship to adoptees born before 1983.

The Adoptee Rights Campaign, an organization that includes adoptees who drafted the Adoptee Citizenship Act, said last year there were about 35,000 adoptees in the United States without citizenship.

The Korean government estimates that this could include up to 18,000 Korean adoptees.

“We have a little bit of a disagreement over what the number means,” Lawrence said. “They [adoption authorities and agencies in Korea] would say there are 18,000 who are unconfirmed and we think the number is quite small.”

She continued, “As I understand it, the Korean government is counting it ... by taking the total number of children from Korea who were adopted by American families and subtracting out those who have made their citizenship status known to the Korean government. Very often, an American family wouldn’t know that they were supposed to inform a foreign government that their American child has American citizenship. They wouldn’t understand why they should do that.”

As it is unclear if or when the Adoptee Citizenship Act will be introduced as a law, Lawrence said she wants to encourage all adoptees to start the process of gaining U.S. citizenship as early as they can.

“Some of the messages we delivered in meetings here, we have met with some people within that community, is that the vast majority of people who apply for citizenship under whatever scheme or avenue available to them through that process will, at the end of the day, wind up achieving their goal,” she said. “The earlier you start, the better off you are. And we are very lucky in Korea because we have the U.S. Citizenship and Immigration Services office at the embassy.”

But the process becomes much more complicated if the adoptee has a criminal record.

“I think those become even more complicated cases because there are all sorts of laws that affect people who have previous connection with law enforcement, and again, it really just depends on the severity of the crime or issue,” Lawrence said. “And I do understand that for somebody whose case doesn’t seem clear-cut, there is a lot of fear going to authorities and government and asking the right question. But you’ll never know how to resolve it until you at least start the conversation.”

Despite some of the struggles of some foreign-born adoptees in the United States, Lawrence is one of the advocates of international adoption as an option for children without parents in a home country.

“We understand that there was a law here in 2012 ... to encourage domestic adoption,” she said, “and they have been somewhat successful in getting more Korean families to adopt Korean children who are available for adoption and in need of a home.”

She added, “However, from what we understand, thousands of children are still in institutional care and we know that the older the children get, the more unlikely it is for them to find a home ... that child deserves better than that, and if there is a family that would like to make a home for that child and give that child a sense of security and permanency, I would say in the absence of any possibility of domestic adoption, we should keep [international adoption] as an option for that child.”

Korea is a signatory country to the Hague Convention on Intercountry Adoption, but its National Assembly has not ratified it. Part of the U.S. State Department’s job is to find partners abroad to accede to the convention so they can cooperate more closely on international adoption.

“One of the reasons why I came here is that Korea and the United States have such a long history [on this topic] ... and in many cases, those children have begun to have ties with Korea as well. This week we had a reception here and I met Marissa Brandt. She and her sister [Hannah Brandt] are both competing for the Olympics. Marissa is on the Korean team. Her sister on the American team.”