The former KT Wiz outfielder, Lee Dae-hyung, earned his free agent status in the Korea Baseball Organization (KBO) upon completion of the 2017 season, though he will likely finalize his contract sometime in 2018. 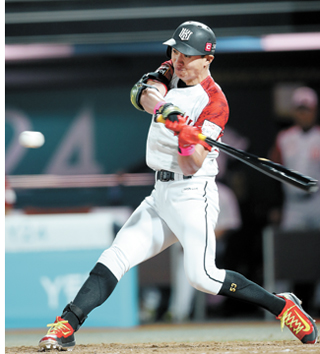 Lee Dae-hyung, formerly of the KT Wiz, swings at a pitch during a game against the Hanwha Eagles on June 16. [YONHAP]

Since Lee made his KBO debut in 2003, this is his second time earning FA status, following the 2014 season.

While he was going through rehabilitation, Lee still chose to be a free agent. Upon completion of the season, Lee had a number of meetings with his former club, the Wiz, but wasn’t able to come to an agreement.

As Lee left to Saipan for individual offseason training, no official announcement regarding his signing will be made for some time.

Yet there is a slim chance he may sign with another club.

“If a player wants, we are willing to allow him to sign with another club without receiving a player in compensation from the other club,” the Wiz said.

In the 2017 season, Lee’s income was 300 million won ($267,000). Under the KBO’s transfer rules, if another club wants to sign Lee, they will have to pay the Wiz 900 million won in compensation, in addition to a player. But there hasn’t been a club that showed interest in Lee.

Lee had to conclude his season earlier than others in 2017, due to a torn ACL sustained while attempting to steal a base. Lee concluded the 2017 season with a batting average of 0.267 with 90 hits and 24 RBIs in 100 games.

Despite the injury, Lee is determined to make a return in the KBO.

“Since Lee Dae-hyung isn’t young as a professional player, he wanted to check his body more thoroughly before making a return,” said the club’s associate at the time.

This isn’t very rare. The club supported Lee by paying half the expense and providing him a trainer.

“We are considering signing with Lee Dae-hyung, who contributed to the team for the past three years,” said the Wiz.

However, they struggled to come to an agreement. Since Lee will be turning 35 and can’t guarantee his health for the 2018 season, the Wiz has to take the risk. At the earliest, Lee will be able to make a return in the second half of the season.

But the Wiz is in no rush, as they already have plenty of outfielders on the roster. Mel Rojas Junior and Yoo Han-joon are almost guaranteed spots as starting outfielders.

The remaining outfielders will be competing for one remaining spot. In addition, Kang Baek-ho, first pick in the 2018 KBO rookie draft, will also be added to the roster.

Kang is expected to play both as an outfielder and a pitcher.

“There’s just too much difference in opinion regarding the contract,” said the Wiz. “Once Lee Dae-hyung returns from offseason training, we’ll meet up with him once again.”