Three rivals train on the slopes

Three rivals train on the slopes 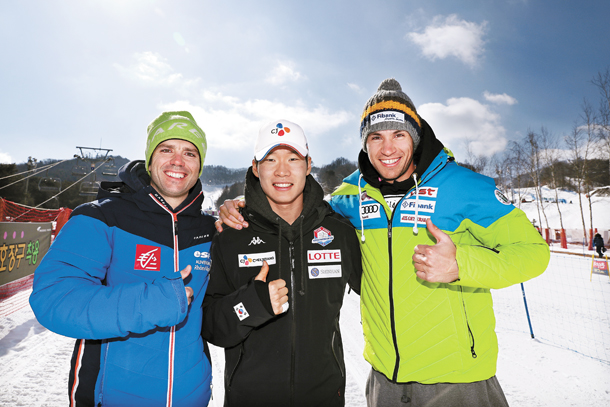 From left, Sylvain Dufour of France, Lee Sang-ho of Korea and Radoslav Yankov of Bulgaria at a test event in February at the Phoenix Snow Park in Pyeongchang County, Gangwon. [KIM HYUN-DONG]

They may be competitors, but the three snowboarders from Bulgaria, France and Korea have been close friends since 2013. 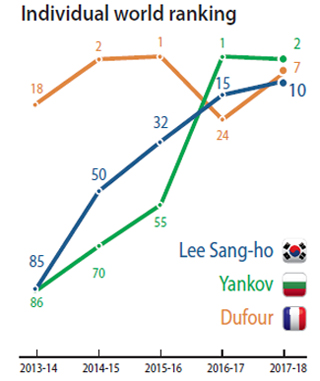 Radoslav Yankov, ranked second in the world; Sylvain Dufour, No. 7; and Lee Sang-ho, No. 10, train together regularly. They call themselves “Team Kobra,” derived from the names of the countries they represent.

Team Kobra started as a partnership between the snowboarders’ coaches, who regularly met at international events to help set up the courses. They started sharing tips on techniques and skills, and invited their skateboarders to train together.

Forming the team has turned out to be positive for the racers, as they motivate each other to produce better results. The snowboarders are now close competitors, three of the top-ranked racers in the World Cup this season.

“Once the racers started to receive attention, we had a bigger bond of sympathy,” said Lee Sang-heon, head coach of the Korean snowboarding team, “so that’s when we decided to come up with a name.”

At first, Dufour was the biggest name on the team. As the top-ranked alpine snowboarder in the 2015-16 season, he automatically became the leader of Team Kobra.

But in the following season, Yankov made the biggest improvement, and he became the top snowboarder.

Although Lee still has the lowest ranking among the three, he is considered the team’s future, showing vast improvement across three seasons.

When Team Kobra first started training together, Lee was outside the top 50. Now, he is 10th, as his country prepares to host the Winter Olympics.

With Lee hitting his stride, there is now even more competition among the three snowboarders. Last December, Lee just missed the podium, finishing fourth at the FIS World Cup in Carezza, Italy. This year at the Asian Winter Games, Lee won Korea’s first gold medal in snowboarding.

The 2017-18 season, which includes the Olympics, will probably be the most competitive yet for the three friends. In the first Europa Cup event on Dec. 9 in Hochfuge, Germany, Lee won the parallel giant slalom race by defeating Dufour in the finals by just 0.1 second.

“He’s always calm and is improving quickly,” Dufour said of Lee in February, when he competed in a test event at the Phoenix Snow Park. “He has delicacy and has boldness. If I have to race against Lee Sang-ho at the PyeongChang Olympics, I want to meet him at the finals.”

In the next two World Cup events, Lee fell behind Yankov and Dufour, getting eliminated in the round of 16.

In his third event, where he switched to parallel slalom, Lee failed to meet expectations, finishing 15th. Lee’s next World Cup event will start on Jan. 5 in Lackenhof, Austria.

“In practice races we had before the start of the season, Sang-ho won seven to eight times in 10 races,” Coach Lee said. “He doesn’t have any problem qualifying because the rankings are made by time. But he still has to work on not getting nervous at the actual event, where he has to play a tournament against a competitor on the other side of the slope.”

Team Kobra’s goal is to stand at the podium together at the PyeongChang Olympics. “We have fierce competitors like Andreas Prommegger of Austria, Andrey Sobolev of Russia and Nevin Galmarini of Switzerland,” Yankov said, “but it’ll be the best if we can win gold, silver and bronze.”