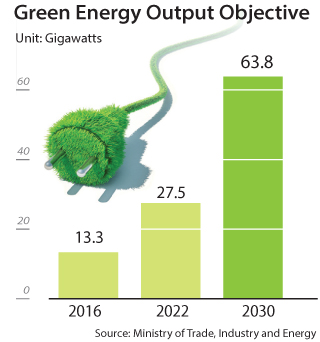 The Energy Ministry announced on Wednesday it will increase renewable energy output by 320 percent over the next 13 years, increasing from the current output of 15.1 to 63.8 gigawatts (GW).

The government’s undertaking is the central part of its long-touted energy initiative, “the 3020 Project,” which aims to raise the amount of power generated by renewable sources such as solar and wind power to 20 percent by 2030. Renewable energy made up 7 percent of the country’s power supply in 2016, according to the government.

Under the plan, the government hopes to increase solar energy by 2030 to 57 percent of total green energy in the nation, or 36.5 GW, from the current 38 percent, which means one in every 15 households will be equipped with solar panels. As of 2016, only one in 94 households has solar panels. In addition, wind power is projected to account for 28 percent, or 17.7 GW, of all renewable energy generated by that time, up from the current 1.2 GW.

“Our initiative to carry out the 2030 project, unveiled today, is very meaningful,” said Energy Minister Paik Un-gyu while presiding over a policy meeting on renewable energy at the Energy Dream Center in Seoul. “For most, this is the new administration’s clear answer to public demands for cleaner and safer energy.”

Public awareness of safer energy sources, Paik added, has been rising since the 2011 Fukushima nuclear reactor meltdown and the recent earthquakes in Gyeongju and Pohang, where Korea’s nuclear reactors are concentrated. He also noted that OECD member states commit more than 86 percent of their total energy investments to renewable energy, adding, “But our current renewable energy output is one of the lowest among OECD nations.”

The government estimates that a total of 110 trillion won ($101.2 billion) will be required to achieve the 2030 objective.

This initiative lines up with the Moon administration’s efforts to pursue green energy while weaning the country of nuclear energy. Warning of the dire consequences of a natural disaster in the nuclear plant-concentrated regions of Gyeongsang, the Moon government seeks to cut the number of nuclear plants, which currently accounts for one-third of the nation’s generated energy, from the 24 down to 14 by 2038.