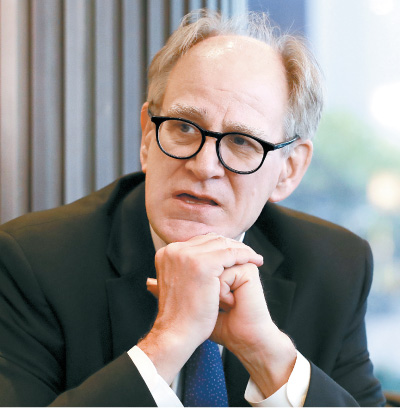 Providing a platform to identify young innovators “who are going to set the pace for the future and giving them support, visibility and connecting them to other people like themselves all around the world,” is one of the goals of Salzburg Global Seminar, said Stephen Salyer, president and CEO of the Austria-based non-profit organization.

Salyer, who previously served as president of the U.S.-based Public Radio International from 1988 to 2005, sat for an interview with the JoongAng Ilbo and the Korea JoongAng Daily at the Westin Chosun Hotel in central Seoul earlier this month.

Salzburg Global Seminar is based in Schloss Leopoldskron in Austria, a historic palace best known for being a filming location for the popular 1965 film “The Sound of Music,” and brings in both opinion leaders and up-and-coming young innovators to share ideas on a range of topics, including health care, economics, geopolitics and LGBT issues.

The global organization, which also has a Washington office, was founded in 1947, when Harvard University students sought to bridge division and revive intellectual dialogue after World War II, to create a “Marshall Plan of the Mind.”

It has brought some 30,000 people from 170 countries, with programs focusing on issues such as health care, rule of law and arts and culture and hosts seminars across the world.

Schloss Leopoldskron, dating back to 1736, was later restored by Max Reinhardt, co-founder of the Salzburg Festival, and since then has been converted into a hotel, an entrepreneurial idea to partially help support 30 percent of the seminar’s budget.

“I won’t compare Korea to Austria, but I do sometimes feel when I go to Vienna and I see the big buildings that were built when it was the heart of an empire, the Austrian-Hungarian empire, they didn’t build these buildings just because of Austria, but they built them because they thought themselves that they were the capital of an empire,” he said.

“I come to Seoul and learn about the history… and the difficulties it has had by being dominated by others over the period,” he continued. “I always say to the Austrians, this is a small country but with an outsized impact, an outsized place in the world, and I feel that about Korea. It’s not the biggest country, it’s not the most powerful, but it has a much bigger place in world than just size alone would represent.”
The seminar brought in Korean interns sponsored by the Korea Foundation for the past four years, and has sought to engage young local players through its Young Cultural Innovators program over the past three years.

“There is so much creativity here, intelligence, here, people who want to be globally connected here and that’s not true everywhere,” he added.

Salyer also got an early start, as the youngest person ever appointed to a U.S. presidential commission at age 19, while still an undergraduate student.

He underwent a Senate hearing and served as a member of the Commission on Population Growth and the American Future.

Before he took his current post in 2005, he was a co-founder and former chair of Public Interactive, a web service company for public television and radio stations, a former senior vice-president of PBS flagship program producer WNET/Thirteen, an associate-in-charge of public issues at the Population Council in New York City and served on the board of Internews Europe.

He began his career as a speech writer for the philanthropist, John D. Rockefeller III, and is a graduate of Davidson College and Harvard University’s Kennedy School of Government.

“The reason I’m doing this job at Salzburg is because a few years later I had a chance to attend a Salzburg seminar and it was on the social impact of mass communication,” Salyer said. “Attending that just convinced me of two things. One was that the future of communications in a globalized world was going to change, and it was going to change with technology changing.”

Around 1,000 people each year attend the sessions, and each session usually has about 50 people from 25 different countries.

“These are not academic meetings; they are meetings where business people, government people, academics, NGOs, they all come together around a shared interest, like dementia and aging, but also do them on the arts for example,” Salyer said.

He also embraces the future of artificial intelligence, saying, “I’m not as afraid of things like human and technology existence merging as some people are.”

Q. You began your career as a speechwriter for John D. Rockefeller III. How did that come about?

A. I was still a student in university and it was in the early 1970s. It was a time of dissent in the United States, a lot of anti-Vietnam War demonstrations and a lot of campus unrest. And so the people in Washington decided they needed to do something to try to bring together more young people into the dialogue because they didn’t want a revolution.

Instead of putting everyone in jail, they decided that they would create some opportunities to engage. Long story short, I was nominated and selected to serve on a presidential commission when I was 19 years old.

There were two other students, and we were looking at population growth and the American future. The chairman of the commission was John Rockefeller III. So we got to know each other, and the commission ran for two years. When it finished, and I had finished university, I took an overseas fellowship to study, and I was continuing to look at this question of family planning, population growth in the world, traveling in Africa. The United Nations had its first World Population Conference in 1974 in Bucharest, Romania.

So, I get this telegram in Nairobi saying can you come back and work with Mr. Rockefeller, on a keynote speech that he’s been asked to give to this conference in Bucharest. I couldn’t say no to that invitation. Sometimes when luck shines its face on you, then you try to take as much advantage and do as much with that as you can.

How does the Salzburg Global Seminar differ from a think tank?

It was right after the Second World War that three young students who were at Harvard University came up with this idea. The Marshall Plan had started for reconstruction in Europe, but the universities were still closed and many had been bombed during the war, and so it was not a very good time. They said we need a Marshall Plan for the mind, not just a Marshall Plan to build highways and start economic revitalization. So they started this summer school for about a 100 people who had been fighting in the war against each other. And that first seminar was so important to those who were involved that they decided to continue it.

So it’s gone on now for 70 years, this is our 70th anniversary, and it has changed from being a European, American thing to a global conversation.

Your headquarters, Schloss Leopoldskron, is especially well-known because of “The Sound of Music,” right?

Five years ago, we tried to figure out what can we do about this because the non-profit was not generating enough funds to support the building. So we created Hotel Schloss Leopoldskron. If you go on TripAdvisor, it’s now ranked the 5th best hotel in Salzburg. When we are not doing own programs there, we generate funds that can help support the non-profit and can keep the building in the best condition. We’ve turned the situation around through our own entrepreneurship, if I can put it that way.

About one third of the time, we have our programs running in hotel and we’re using most of the rooms, and about two thirds open for the public to come for weddings, special events so forth. What it’s allowed us to do is to keep this very special, almost unique setting. The people who come to our meetings, our seminars, they are our guests they live there for the time they are there.

They can walk on the grounds where we have our sculptures, they can be inspired, and they can kind of forget maybe some of the trouble they had where they left or some of the limitations, and they can be free to think freely, to walk with others where the children fell out of the boat in “The Sound of Music.”

The place is a very special part of inspiring the kind of free thinking and free communication that we try for.

Do you deal with Northeast Asia issues?

About three years ago, there was a commission of inquiry (COI) at the United Nations on human rights in North Korea. About one year after the COI, we were approached by some people interested in that subject who said could you arrange an off the record opportunity to discuss this in Salzburg, and don’t call attention to it. We brought about 40 people from around the world including from China and Russia to talk about the subject. All three commissioners of the COI came. I think it’s the only time all three of them have been together at the same place since the report.

What sort of synergy is there between artificial intelligence, technology and the fourth industrial revolution and the culture and arts in imagining the future?

I’m not as afraid of things like human and technology existence merging as some people are. Some people are already carrying artificial parts around. If there was something on the market tomorrow that would be implanted in my brain and I could converse with you in Korea, I probably have it implanted.

I just had my first grandchild. Are my great, great grandchildren going to be marrying robots? What is the future going to be? We really don’t any of us know. So can the world of arts, of speculation, of thinking in new ways, can it open up ideas that give us a glimpse maybe of what we should be starting to think about or what it means to be human in another 70, 80 years.