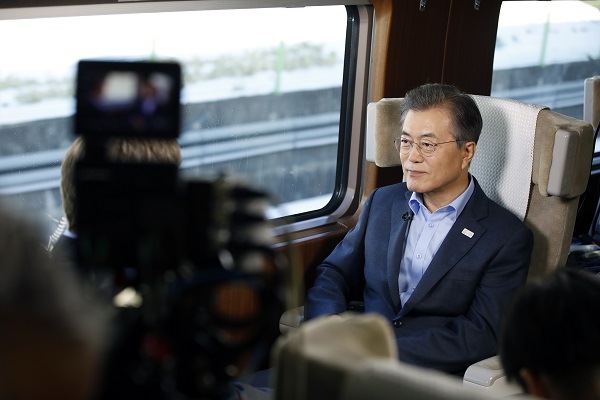 President Moon jae-in conducts an interview with NBC, the main broadcaster for the 2018 PyeongChang Winter Olympic Games, on a KTX bullet train to Gangneung, another site of the Olympic Games in Gangwon, on Tuesday. [YONHAP]

South Korea has asked the United States to consider delaying routine joint military exercises in the coming months as a bargaining chip to get North Korea to negotiations on its nuclear and missile programs, President Moon Jae-in said Tuesday in an interview with an American broadcaster.

“It is possible for South Korea and the U.S. to review the possibility of postponing the drills,” Moon said in an interview with NBC News on Tuesday. “I have made such a suggestion to the U.S., and the U.S. is currently reviewing it.”
“It all this depends on how North Korea behaves,” he added.

“If North Korea stops its provocations leading up to the Pyeongchang Olympics, it will greatly help in holding a safe Olympics,” he told NBC, the main broadcaster of the upcoming winter sports event. “Also, it will help in creating a conducive atmosphere towards inter-Korean as well as U.S.-North Korean dialogue.”

Korea will hold the 2018 Winter Olympics in Pyeongchang, a northeastern city near the inter-Korean border, from Feb. 9 to Feb. 25, followed by the Paralympic Games.

South Korea and the United States hold annual Key Resolve and Foal Eagle exercises every spring. They may overlap with the Paralympics Games, which take place from March 9 to 18. A senior presidential official said Wednesday that military authorities of the two countries are discussing a potential delay.

Over the past months, Moon has been promoting the notion that the Olympics should be used as a lever to start dialogue with the Kim Jong-un regime. He invited the North to send athletes to the sporting event, although Pyongyang has yet to respond.

In the NBC interview, Moon also gave his assurance that the sporting event will take place safely, dismissing the idea that athletes and foreign tourists should stay away due to tensions on the Korean Peninsula. “I hope that this Olympics will be able to promote peace between the North and South Korea and become an Olympics for peace,” he said.

A senior Blue House official said Wednesday that Moon’s remarks were a calculated move.
“It could be a signal to the North that we have made all these preparations,” the source said. “It is an expression of Moon’s will to use the Olympic Games as the starting point for peace on the Korean Peninsula.”

The proposal also echoed China’s “dual suspension” idea to resolve the security crisis on the Korean Peninsula. China has proposed that the United States and the South stop joint military exercises in return for the North halting its nuclear and missile programs. While Seoul and Washington maintain the drills are defensive in nature, Pyongyang has long insisted that they are hostile war simulations to practice an invasion of its territory.

Until now, the Blue House has denied that the Moon administration is considering China’s proposition. Rep. Lee Hae-chan, Moon’s special envoy to China, recently said Korea and China agree on the concept of dual suspension, but the Blue House said it was his personal reaction.

Although Moon’s interview was the first formal announcement of Seoul asking Washington to delay the drills, the idea has been widely mentioned by government officials over the past weeks. But it is still extraordinary for Moon to say that he made the proposal to the United States because Washington has not announced its decision.

It is unclear when Seoul made such a proposal to Washington, but the North’s launch of the new intercontinental ballistic missile on Nov. 29 is believed to be a trigger. Moon had two phone calls with U.S. President Donald Trump on Nov. 29 and 30.

A Blue House official said the two presidents noted that the crisis had entered a new phase. “The North refused to join talks until it masters the technology to place a nuclear warhead on an intercontinental ballistic mission in order to gain higher ground in the negotiations,” he said. “After the North declared that it has mastered the technology, the situation changed. It was necessary to make a judgment on the possibility that the North is now ready to join talks, and Moon and Trump discussed it.”

In order to create an atmosphere for dialogue, Moon apparently suggested a possible delay in the joint military exercises. “It is true that Moon proposed the idea. The president made the decision,” a senior Blue House official said Wednesday.

Moon also had a summit with Chinese President Xi Jinping on Dec. 14. Although there was no direct mention of China’s “dual suspension” proposal, efforts to use the Olympic games to forge peace on the peninsula were discussed, another source at the Blue House said.

The key aide said Moon looked extremely satisfied when he ended the summit with Xi, allowing Blue House officials to believe that he and Xi had agreed on some element of how to handle the security crisis. Just three days after his return from China, Moon talked about a possible delay of the joint military drills. A senior Blue House official said Moon told Xi during the summit that managing the next three months is crucial and Xi talked about Korean Peninsula affairs.

Following the Korea-China summit, Moon’s national security chief, Chung Eui-yong talked to his White House counterpart, National Security Advisor H.R. McMaster, on Monday. It appeared that Moon decided to make public the proposed delay of the joint military exercises because his aide received a positive response from the Untied States.

The source dismissed the possibility that Washington will be offended by Moon’s announcement. “We took everything into account,” he said. “We believe it is an idea that deserves the U.S. consideration.”