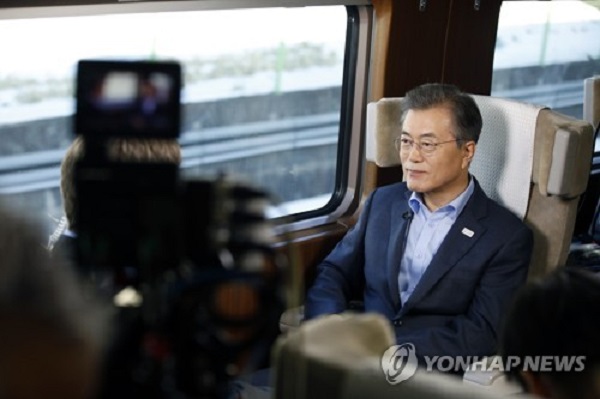 South Korea and the United States may consider postponing their joint military exercise as part of efforts to reduce tension and invite North Korea to the Winter Olympic Games to be held in the South, President Moon Jae-in said Tuesday.

Moon, however, said the move really depends on the way North Korea behaves.

"It is possible for South Korea and the U.S. to review the possibility of postponing the exercises. I have made such a suggestion to the U.S. and the U.S is currently reviewing it. However, all this depends on how North Korea behaves," he said in an interview with U.S. broadcaster NBC on Tuesday (local time).

The interview was held on a KTX bullet train traveling from Pyeongchang, the venue of the 2018 Winter Olympic Games, to Seoul.

The South Korean president made a one-day trip to the city located some 180 kilometers east of Seoul as part of efforts to promote the upcoming sports event.

Moon said his country was still waiting for the communist North to take part in the quadrennial event.

"Given their track record, North Korea is likely to make the decision to participate in the Olympics at the very last minute," he said.

He also sought to assure the safety of those taking part in the Games from other countries, saying he does not believe North Korea will try to disrupt the Games.