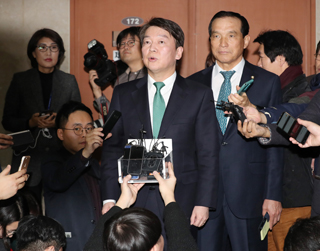 Ahn Cheol-soo, chairman of the People’s Party, holds a press conference to propose an internal vote on a merger with the conservative Bareun Party, in the National Assembly on Wednesday. Ahn staked his chairmanship on the outcome of the vote. [YONHAP]

The leader of the center-left opposition People’s Party on Wednesday proposed an internal vote on a merger with the conservative Bareun Party, a move to step up his middle-of-the-road campaign despite intense pushback from party seniors.

Ahn Cheol-soo staked his chairmanship on the outcome of the vote on the merger, which he apparently believes would strengthen his party’s parliamentary foothold ahead of the gubernatorial and mayoral elections slated for next June.

“Today, with a resolute determination, I would like to ask all party members what they think about a merger with the Bareun Party,” Ahn told reporters, saying the poll will be equated with a vote of confidence for him.

If the vote outcome is in favor of the merger, he said he would “sternly and promptly” work for the integration. He promised to join the new party as a rank-and-file member to pave the way for its success and bring in new figures.

“If the party members’ views are found to be the opposite, I will heavily accept that and will do anything, including stepping down,” he added.

Ahn also issued a veiled criticism of those against the merger.

“Unfortunately, some party seniors oppose the integration efforts based on the unsubstantiated claim about the sentiment in the Honam region [the party’s stronghold in the country’s southwest], and call for a vote of confidence on me,” he said. “Now is the time for us to quickly address internal confusion and stand united.”

Ahn has been striving to bring together “rational liberals and reform-minded conservatives” so as to counterbalance two major political forces - the ruling Democratic Party and the main opposition Liberty Korea Party, which together control 237 seats in the 299-member parliament.

His push for integration has met stiff resistance from party seniors who argue the two parties cannot join due to different ideological roots and gaps in policy stances, particularly on how to deal with the nuclear standoff with North Korea.

Ahn’s opponents have warned that joining hands with those on the other side of the political spectrum will undermine the party’s liberal platform, obscure its political identity and inflame its supporters in the Honam region.

“Pushing for integration with the conservative force beyond a cooperative relationship is an act that betrays those who supported the People’s Party during the last parliamentary and presidential elections,” Chung Dong-young, a senior party member, wrote on Twitter.

The integration push came amid the emerging prospect of a major political realignment ahead of next year’s elections, seen as a crucial referendum on President Moon Jae-in’s first year in office.

Yoo Seong-min, the leader of the Bareun Party, has also been pushing for integration, as his party is exploring ways to survive in times of political flux after being hit by mass defections.