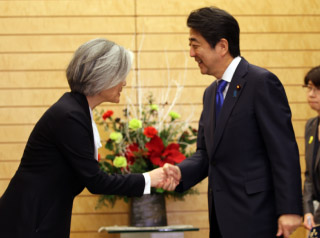 In February 2012, the South Korean Navy came across a strategic jewel in the West Sea after North Korea launched its Unha-3 long-range missile.

North Korea had been blasting more than 100 rockets into the sky since 2005, but it was the first time South Korea was able to retrieve parts of them.

The debris contained lots of information. Many of the components came from outside North Korea, some from Russia and China, some from the United Kingdom, United States and Switzerland.

But most surprisingly, it also contained high-density synchronous dynamic random access memory from South Korea. Someone must have purchased the parts abroad and smuggled them into North Korea.

Seoul authorities suspect ethnic Koreans in Japan were behind the shipment. Members of Chochongnyon, a pro-North Korean group based in Japan, could have made the purchase in Japan or South Korea, and could have used a faked South Korean identity. There’s no telling how many Chochongnyon members might be living in South Korea under a disguise.

The Japanese intelligence agency might come in handy in this area. Intelligence officials in Seoul already seek Tokyo’s help in watching for any illicit weapons trade in North Korea. That is why the security alliance with Japan is important. It is also a weakness on Seoul’s part as it continues to pursue renegotiation of the so-called comfort women deal settled two years ago.

The administration under liberal President Moon Jae-in, however, is intent on keeping his campaign promise of revisiting the comfort women deal, which was signed by his conservative predecessor Park Geun-hye and included reparations from Tokyo for the Japanese military’s use of Korean sex slaves during World War II.

Moon’s government launched a task force in July to investigate how Seoul suddenly came to an agreement with Tokyo on the controversial issue. The findings are expected to come out next week.

From the mood so far, the results will raise questions about the deal’s procedure. Foreign Minister Kang Kyung-wha flew to Tokyo and met with her Japanese counterpart, Taro Kono, to seek Tokyo’s understanding before Seoul releases controversial findings from its five-month reexamination of the deal.

If Seoul nullifies the agreement based on the current government’s findings, ties with Japan could worsen beyond repair. Seoul inevitably has to join forces with Tokyo in the common goal of defending against Pyongyang’s nuclear threat.

If South Korea walks away from the agreement, the bilateral security alliance will be in jeopardy. Seoul has already learned from President Moon’s visit to China that Beijing is not a reliable security partner.

Instead of breaking the deal, it would be best to seek amendments. The two countries have revisited and moderated the terms of bilateral deals and agreements many times.

It is true that many parts of the deal were preposterously disrespectful to comfort women victims. Tokyo has never officially apologized for using sex slaves during World War II, and the two governments did not reflect the voices of surviving victims.

So instead of killing the deal, Seoul should persuade the Japanese ambassador to deliver a written apology from the prime minister to the victims. We cannot afford to ignore the strategic value of Japan and the value of having them on our side for security reasons.