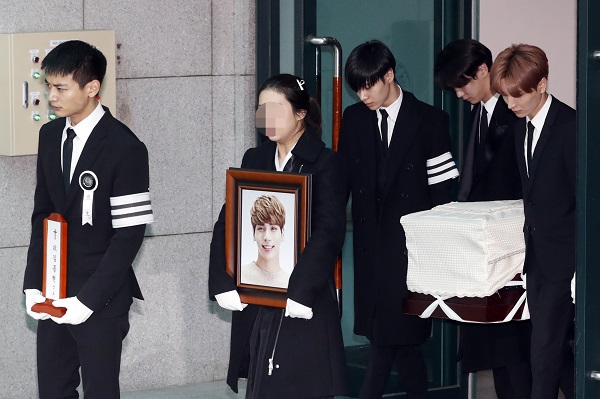 The funeral for the late Kim Jong-hyun, member of K-pop group SHINee, was held Thursday, attended by his family, close friends and fellow artists.
Kim, better known by his stage name Jonghyun, died Monday in an apparent suicide. The 27-year-old singer left a note describing his harrowing battle with depression.
A private funeral service was held for Kim at Asan Medical Center in eastern Seoul at 8 a.m. In attendance at the ceremony were his family and SM Entertainment colleagues, including fellow SHINee members.
K-pop artists Leeteuk, Eunhyuk and Donghae of Super Junior and SHINee members appeared grief-stricken as Kim's casket was carried out. Kim was later moved to an undisclosed location where he was to be laid to rest.
Hundreds of fans also gathered around the hospital to say goodbye to the late star.
Many big-name K-pop stars, including SM Entertainment founder and senior producer Lee Soo-man, members of Girls' Generation, BTS, Wanna One, CNBLUE and Epik High, paid their respects to Kim during the three-day mourning period.
Kim was picked as a trainee for SM Entertainment in 2005 and debuted in May 2008 as the lead singer of SHINee. He thrived in the music business for nearly a decade, not just with his group, but also as a celebrated solo singer-songwriter.
The news of Kim's death came as a shock to his acquaintances and fans, especially given the fact that he's been active in the public spotlight recently. Kim's last public appearance was at a solo concert, titled "Inspired," which was held on Dec. 9-10 in Seoul.