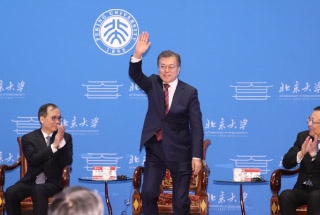 President Moon Jae-in waves at students before his address at Peking University on Dec. 15. [YONHAP]

Jung Yul-sung, who is known as the father of Chinese military music, returned to Hwanghae province, in the northwest of the Peninsula, in 1945 and became the provincial propaganda director for the North Korean Workers’ Party. His Chinese wife Ding Xuesong, a revolutionary, had a connection with the Chinese Communist Party. She served as a special envoy for food in North Korea and worked as the head of the Xinhua News Agency’s Pyeongyang bureau before the 1950-53 Korean War.

After the war broke out, Ding asked Zhou Enlai to return to China together with her husband. Zhou sent a handwritten letter to North Korean leader Kim Il Sung asking him to allow them back. Kim responded, “As the Chinese Communist Party helped train so many of our cadre, sending Jung is not a problem.” In December 1950, Jung crossed the Aprok (Yallu) River and participated in the war as a part of the Chinese Military’s propaganda division. At a banquet hosted by Kim Il Sung, Jung suggested to Chinese writer Liu Baiyu that he collaborate on a song for Chinese soldiers.

During his visit to China, President Moon Jae-in mentioned Jung to Peking University students, saying that Korea and China are friends who suffered the pains of modern history. Some criticize Moon’s move for damaging national status. But many defended him, saying diplomacy should be evaluated pragmatically based on national interest.

China maximizes its national interests with detailed diplomatic tactics that may seem trivial to our eyes. It does not target Korea’s key parts or materials but retaliates on consumer goods, distribution and tourism. Instead, they make provocations out of meticulous calculations, like giving poor treatment to VIPs, even if they are heads of state or top officials.

When North Korea was valuable as leverage for diplomacy with America, China’s most powerful man would go to a remote northeastern province and welcome the North Korean leader at the train station platform. When China needed something from Korea, China even opened the palace of the Qing emperor and offered a special luncheon that was not in the schedule.

Now North Korea is the urgent issue. After the Korea JoongAng Daily reported in a May 5 article titled “Xi’s red line on the peninsula” that the China’s People’s Liberation Army may push down to the Chongchon River-Hamhung line to handle refugees in case of a sudden change in North Korea, U.S. Secretary of State Rex Tillerson said that the United States and China are having in-depth discussions.

U.S. think tank Rand Corporation recently warned that the possibility of the People’s Liberation Army moving southward was high. China is struggling with the psychological warfare of the United States aiming to crack Washington-Pyongyang relations, while North Korea is dismissing China. Now is no time for Beijing to argue whether it is a big country or not.