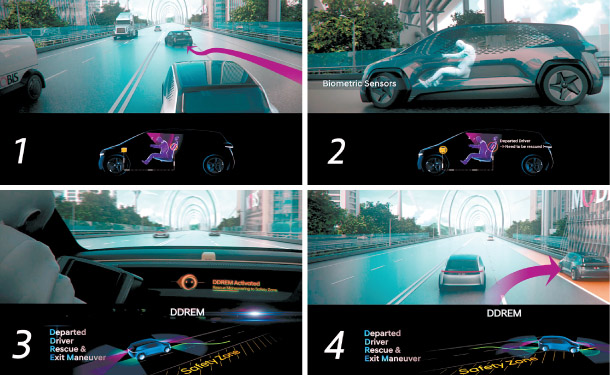 How Hyundai Mobis’ departed driver rescue and exit maneuver system works: 1. Cameras and sensors outside the car track the vehicle’s movement. 2. A camera inside the car scans the eyes of a driver to figure out whether he or she is awake. 3. If not, the system’s self-driving mechanism is activated and takes control of the vehicle. 4. The system safely pulls over the car on the side of the road. [HYUNDAI MOBIS]

Hyundai Mobis, the auto parts supplier of Hyundai Motor, is developing an autonomous driving system that can automatically stop a vehicle when it believes the driver has been incapacitated.

The company plans to showcase the system, called departed driver rescue and exit maneuver, or DDREM, at the Consumer Electronics Show in January.

DDREM is capable of detecting the condition of a driver and navigating the vehicle safely to the side of the road if it finds the driver is unable to function properly behind the wheel.

A Hyundai Mobis spokesman said Thursday that the technology is considered level four and above in the Society of Automotive Engineers’ gradation of self-driving technology, which means the system is able to operate a vehicle completely on its own without a human having to take control of the wheel.

The spokesman added that the company had to develop two key technologies for the system: a driver status warning system and driver awareness warning system.

The first involves a camera inside the vehicle that monitors the condition of the driver by detecting the movement of his or her eyes. The latter tracks the vehicle’s movement on the road with a front-facing camera and sensor that monitor whether the car is straying outside of designated lanes.

The company said in a press release that the system will initially work to detect drowsiness and prevent motor accidents that occur due to drivers falling asleep on the road. Development of technology in this initial stage is set to be complete by 2021.

Afterward, Hyundai Mobis plans to further develop the technology to even detect when a driver suffers a heart attack.

According to the American Automobile Association, there were about 6,400 vehicular accidents in the United States in 2015 where drivers and passengers were killed due to drowsy driving.

Aside from showcasing the DDERM system at the Consumer Electronics Show in January, Hyundai Mobis plans to open a separate booth showcasing various technologies like hologram driving assist and technologies for eco-friendly cars.