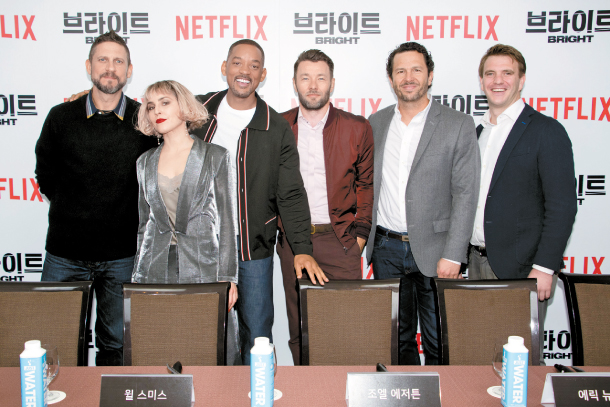 Will Smith further cements his image as an action hero in director David Ayer’s latest original Netflix feature “Bright,” which places the star in the middle of a fight between good and bad.

Set in an alternate present where humans and creatures like orcs, fairies and elves have coexisted since the beginning of time, the fantasy crime action flick follows human LAPD officer Ward (Smith) and his orc rookie counterpart Jakoby (Joel Edgerton), who is rejected by both humans and his own kind.

After stumbling across an ancient and powerful magic wand while on duty, the two become engaged in a war over the wand against the dark elf Leilah (Noomi Rapace), who sets out to get the wand at any cost.

“In terms of the role, I was attracted to the really bizarre nature of the screenplay. It’s a cop drama that is sort of blended with ‘The Lord of the Rings,’” Smith told Korean reporters during a live press conference on Wednesday. “It’s a beautiful mash-up that creates its own unique world.”

In addition to the hard-core action and fantasy elements, “Bright” delivers a timely thematic message about racism, classism and how one treats others, which is what drew Rapace into the film.

“I was very impressed at the concept of being in a very big action cop buddy movie. But [at the same time] it resonates an important message in the way we should treat each other, and that element of the movie made it more exciting,” said the Swedish “The Girl with the Dragon Tattoo” star.

As for the director, whose previous works include “Suicide Squad” (2016) and “Fury” (2014), “The real message is no matter where you are from and what you look like, you have the right to try yourself and to chase your dream.”

The orcs are similar to the main beast from Korean auteur Bong Joon-ho’s “Okja,” another Netflix original feature that was released this summer, according to Edgerton.

The star, who had to go through 3 hours of makeup every day on set, said his role is very similar to Okja in that they are both “misunderstood and mistreated” creatures.

Edgerton added that “Bright” and “Okja” also share common ground in that they are not only entertaining, but also have something important to say about the world beyond the entertainment.