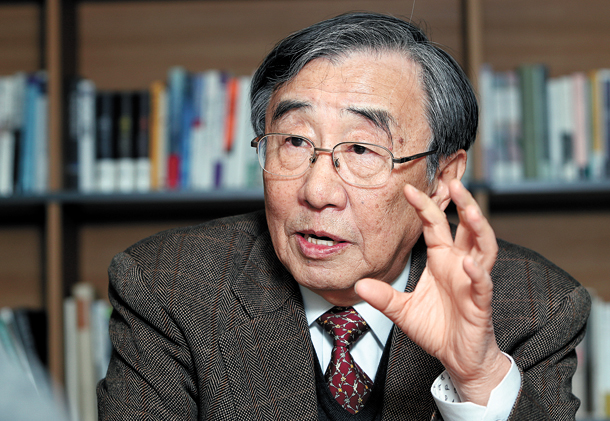 Suh Jin-young, honorary professor at Korea University, sat down with the JoongAng Ilbo for an interview last Friday. He is regarded as the founder of Chinese studies in Korea. [CHO MOON-GYU]

President Moon Jae-in’s trip to China from Dec. 13 to 16 was fraught with controversy, to say the least. What was supposed to be a dignified affair of two heads of state convening to address crucial regional issues was tarnished by bad protocol and violent assaults on Korean reporters.

The JoongAng Ilbo sat down with Suh Jin-young, honorary professor at Korea University, to hear his view of the trip. Suh, 75, is regarded as the founder of Chinese studies in Korea, having studied the superpower for over 50 years. He was critical of the meeting, summing it up as one that resulted in Koreans losing the trust of the United States and Japan, and China losing the hearts of the Korean people.

Q. Was the summit meeting a success or a failure?

A. The Moon administration approached the summit meeting strategically from the start. It wanted to send a message that it would try to resolve the Korean Peninsula issue by strengthening strategical cooperation with China. To curry Chinese favor, Moon proposed the so-called three nos - no additional Thaad deployments, no joining of a broader U.S. missile defense system and no Korea-U.S.-Japan military alliance. He also made clear to world leaders that Korea doesn’t consider Japan an ally, and steered away from the “Free and Open Indo-Pacific Strategy,” a Japanese and American venture to contain Chinese influence in the region. Through the summit, Moon clearly expressed his desire for Korea to walk by China’s side in the 21st century, rather than remain within the trilateral security alliance of the Cold War with Washington and Tokyo.

By insisting against war and opposing the American proposal of confronting North Korea militarily, the Moon administration basically lost the most powerful tool it could use to pressure North Korea. Moon and Xi also failed to discuss how to bring Pyongyang to the negotiating table, leaving the North Korean nuclear issue without any solutions.

What was Moon’s biggest loss during the meeting?

He lost the trust of Japan and the United States. Tokyo, which has been criticizing Korea for relying too heavily on China, probably lost faith in Korea’s will to cooperate with Japan. Washington also has no choice but to doubt the Korean government’s determination to help address the North Korean issue and engage in security cooperation. There is even a possibility that Washington may act unilaterally in countering North Korea without consulting Seoul, or fail to come to Korea’s side at a critical moment. The IMF crisis of 1997, brought on by a foreign exchange shortage, is a good example. Though at that time we only suffered financial bankruptcy, we may be facing military and security bankruptcy in the future.

I think it was also problematic that Moon alluded to the Nanjing Massacre three times during the meeting. By bringing up Nanjing, the Moon administration was hoping to circumvent the Thaad controversy and elicit Chinese cooperation by sympathizing with it as a historical ally under Japanese imperial rule. But this is a dangerous step that risks losing Japan’s goodwill. Even if we expect China to grow more powerful, we’ll probably need to spend the next 20 years working closely together with the United States and Japan. We aren’t going to gain much of anything by slamming Japan.

Why was there a controversy from the very first day?

The Moon administration was very ignorant if it scheduled the China trip to begin on Dec. 13 without realizing that the day fell on the 80th anniversary of the start of the Nanjing Massacre. If they chose the date knowingly, the only rational explanation would be that the administration was on a rampage to upset relations with the United States and Japan and run straight into China’s arms. I am really curious to know who chose the date, and with what intentions.

Why did South Korea strongly wish for a summit meeting with China before the end of 2017?

From the start, China gave off the attitude that it wasn’t ready to have a summit meeting with Korea. But the Moon administration wanted to restore relations with China through the upcoming 2018 PyeongChang Winter Olympics. Moon planned to increase his administration’s international status by having a successful meeting with Xi, which he hoped would set off a chain of events including the resolution of the Thaad controversy, North Korean participation in the Olympics and improved relations between the two Koreas. Given that Tokyo and Beijing are going to hold the two Olympic Games immediately following PyeongChang, Moon had a grand plan to transform East Asia into a region of peace and celebration via sports.

What did China gain from the summit meeting?

China was able to show the entire world how desperately Korea was trying to hold on to it, bearing all humiliation. This display was particularly significant for the United States. In the game of superpowers, China stole a valuable card from its opponent and brought it to its own side.

Xi took domestic politics into consideration. Though people say that Xi has absolute power in China, he has yet to produce any concrete achievements in diplomacy. He’s pushing for the One Belt, One Road initiative, an attempt to recreate the Silk Road for easier access into Europe and Central Asia, but Chinese relations with the United States, Japan and other neighboring countries are rocky. Furthermore, China suffered humiliation from North Korea. I suspect that now he is trying to use the Korean Peninsula issue to uphold the pride and self-esteem of China as a superpower.

Moon is trying to look 20 years ahead while conducting international affairs, but he is revealing all of Korea’s inner thoughts in the process. Korea, surrounded by superpowers, must engage in “realtor diplomacy.” When realtors sell homes, they need to gain the trust of both the buyer and seller. You have to be cautious in what you say, act prudently and be honest.

The current administration is now well-known domestically and internationally for its ad hoc diplomacy and backtracking on its statements. One of the reasons the meeting ended like it did is because China didn’t trust us. Harshly speaking, Korea is looking like a traitor to the United States, and an opportunist to China. If this goes on, strong powers may ignore Seoul when they’re making important decisions concerning the peninsula.

How can we resolve the North Korean nuclear issue?

At this pace, we have no choice but to condone or acknowledge North Korea’s nuclear capacity. With both powerful nuclear and conventional weapons, Pyongyang is on the road to becoming the “Israel of Northeast Asia.” No country will be able to touch it. It’s inevitable that South Korea and Japan are talking about equipping themselves with nuclear weapons. Using their insecurity to its advantage, the United States will try to convince the two into containing China in exchange for tolerating their nuclear programs.

What if this option doesn’t work?

If we exclude the options of arming Korea and Japan with nuclear capacity and militarily oppressing the North, the only option we will have left to resolve the North Korean issue is a forced regime change. One day, we may have a new regime in North Korea either willing or compelled to give up its nuclear arsenal or entrust governance to the United States, China or an international body. To create that situation, we need strong pressure against Pyongyang, which will only be possible through cooperation with the United States and China. It’s notable that U.S. Secretary of State Rex Tillerson recently discussed with China possible steps they could take in the event of a conflict or regime collapse in the North.

How do you view the assault on Korean reporters?

There have been many incidents of foreign reporters being assaulted in China. British reporters from the BBC as well as German and American reporters have all been beaten up there before. Because the assault on the Korean reporters occurred during a state visit, however, the issue became much graver. The Chinese government probably didn’t plan it, but the assault was a reflection of the Chinese people’s general attitude towards Koreans. Such an event would have never happened during a visit of someone Xi Jinping really respected.

The Moon administration may have attended the meeting prepared to bear a little humiliation if it thought that was going to help establish a strategic framework of cooperation with China for prevention of war in the Korean Peninsula. Though in domestic politics it’s possible to take a different route if you have a change of heart, there is no room for trial and error in diplomacy.