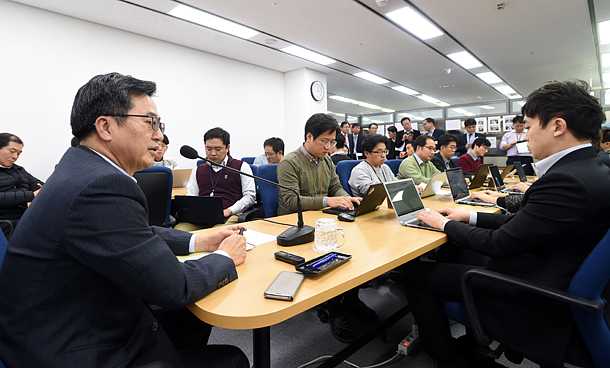 Finance Minister Kim Dong-yeon answering questions during a press briefing held at the ministry’s press room in Sejong on Thursday. [MINISTRY OF STRATEGY AND FINANCE]

Finance Minister Kim Dong-yeon said the government will be looking into improving the foreign investment promotion act, which is considered to be outdated.

“We have been reviewing [the foreign investment promotion act] since there were questions raised about whether there is a need to maintain a system that was first created in the 1960s,” Kim said, “at a time when the nation’s foreign reserves exceed $380 billion and foreign investment influx is stable. The system was first introduced when Korea was in need of foreign investment, and it expanded during the IMF [financial crisis in the late 1990s], when the need surged.”

Kim’s comments, made during a press briefing held on Thursday, came on the heels of the European Union blacklisting Korea, among 17 countries, for “non-cooperative tax jurisdictions,” accusing these nations of playing “particular roles” in tax avoidance and evasion.

In particular, it saw Korea’s economic free zones and foreign investment zones as tax systems that have been offering favorable tax benefits to foreign companies, which is seen as a discrimination against local companies. The Finance Minister said it is currently working with the European Union to restore Korea’s external credibility and get it off the list as early as January. Kim also mentioned the recent hype surrounding cryptocurrencies.

“[Cryptocurrency] has a strong tendency for speculation and there’s a huge concern over the damage inflicted on investors,” Kim said. “We are currently monitoring the situation, but our first principle is to act strictly on any criminal activity or side effects of speculation.”

“We held a meeting on this issue yesterday [Wednesday] and collecting such cases [from major countries],” Kim said, adding that he was given a report on placing profit-gain taxes on the exchanges. But he also, “We need to review ways to encourage new technologies such as blockchain.”

Kim also answered questions on the nation’s first religious tax, which will be implemented next year. On Thursday, he made a minor change whereby clergies will have to report to the National Tax Service the income they receive from their religious group as “religious activities.” Any such income, including pastoral practices, will be exempt from taxation.

The change came at the order of Prime Minister Lee Nak-yeon, so that the religious tax would be accepted by the public. The exemption drew criticism not only from the public, but from liberal religious groups, who argue that it will only lead to tax evasion.

“It’s hard to give an accurate answer,” Kim said. “Will [the new change] meet the public’s expectation? It depends on the person.”

He said “religious activity” is not an individual activity, but rather expenses needed to pursue religious practices, and therefore qualify for exemption.

“The most importing thing is to first implement [the religious tax],” Kim said. “Then, making changes afterwards.”

When asked about the higher corporate tax in Korea compared to the U.S. Senate’s recent reform bill, Kim said 99.7 percent of the companies paying their taxes are paying on a lower rate then the new U.S. corporate tax of 21 percent, which was slashed from 35 percent. Although in fact, Korean corporate taxes have been raised from 22 percent to 25 percent.

“The corporate tax rate does have an influence on business activities, but there are also factors other than taxes, such as management decisions,” Kim said. “Although we have raised the maximum corporate tax rate, we are currently working on a grander negotiation that will help Korean companies to be innovative, including a more flexible yet stable labor market model.”

Kim also expressed confidence in the Korean economy, adding that he is certain next year Korea’s per capita GNI will exceed $30,000 for the first time. But he was cautious about the risks, including the intensifying geopolitical situation created by North Korea.

On the direction of the Finance Ministry’s economic policy next year, which will be officially announced next week, he said the government will continue to emphasize creating jobs as well as innovative growth.