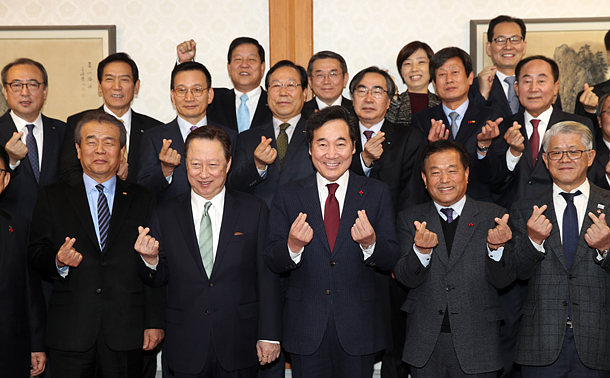 Prime Minister Lee Nak-yeon, center; Korea Chamber of Commerce and Industry Chairman Park Yong-maan, second from left; and members of the chamber of commerce at the prime minister’s residence in Samcheong-dong, central Seoul, on Friday. [YONHAP]

Prime Minister Lee Nak-yon on Friday called large companies irreplaceable partners in the government’s drive for economic growth, apparently seeking to quell any criticism that the current administration might be leaning too favorably toward labor.

“No one can deny the contribution that economic leaders have made to the Republic of Korea,” the prime minister said while meeting with 18 leaders of the Korea Chamber of Commerce and Industry. “The chamber’s role has been growing, and it will continue to grow at a more rapid pace.”

The meeting at the prime minister’s official residence followed earlier reports that President Moon Jae-in might not attend the annual New Year’s gathering for business leaders.

The reports prompted concerns that the liberal president might be trying to keep its distance from business leaders, especially because they came hours after Moon held a special meeting at his own office with some 120 union leaders and company officials to praise them for their labor-management relations.

The Blue House has acknowledged the president may miss the New Year’s meeting with business leaders, to be hosted by the chamber of commerce, but that he plans to invite business leaders to a similar meeting at his office that will also involve leaders of other areas.

“I ask all the chairpersons [of business groups], including the chamber chairman, Park Yong-maan, to continue offering great instructions for the good of the business circle and the entire Republic of Korea,” Prime Minister Lee told the executives. “The government, too, will continue to communicate with you without any disruption.”

The prime minister also sought to win their support for government efforts to create more jobs and boost household income.

Lee said the country’s per-capita income was expected to reach the $30,000 mark in the near future, but that the new feat will also come with three new challenges.

“First, we must continue to grow through innovation and new industries,” he said. “The second challenge is that we must continue to push for people-oriented, income-led growth because there are many people who do not realize our per-capita income is nearing $30,000, and in fact, many rather feel they are now worse off.”

The third requirement, Lee said, is to transform the system to prepare the country for new changes. YONHAP