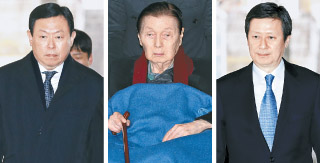 Lotte Group avoided the worst-case scenario as the Seoul Central District Court on Friday suspended group chief Shin Dong-bin for multiple embezzlement charges that have been choking the nation’s fifth-largest conglomerate for the past 14 months.

It was speculated that it would not be easy for Shin to avoid the jail term since the case has received nationwide interest.

But the embezzlement of 4.71 billion won by forcing Lotte affiliates to make unfavorable investments in the financially ailing Lotte PS Net, an ATM manufacturer, which was one of the core allegations against Shin, was not acknowledged by the court.

His additional charge of conspiring with his father and Lotte founder Shin Kyuk-ho to allow the father’s mistress, Seo Mi-kyung, to run snack bars at its Lotte Cinema outlets was acknowledged as business malpractice, but was not determined to be a specific economic crime.

The court concluded that it was “difficult to calculate the amount of damages.”

It added, “[Even though Shin Dong-bin claims] it was hard to say no to his father’s commands, it is difficult to deny his role in processing the crimes. High social status and strong authority should be followed by heavy responsibility.”

Lotte founder Shin Kyuk-ho was sentenced to four years and a fine of 3.5 billion won. His eldest son, Shin Dong-joo, was acquitted.

Lotte Group has been walking on eggshells this year, with its owner family members involved in more than one charge, while its business has been hit hard by retaliation from Beijing due to the two countries’ geopolitical conflict.

The new Moon Jae-in administration has been watching the group’s activities as part of its initiative to wipe out conglomerates’ business malpractices.

In response to this, Shin Dong-bin pledged earlier this year to organize the group’s complicated management structure to increase the level of transparency.

Shin established Lotte Corporation as a holding company in October, which single-handedly controls 42 retail- and food-related affiliates under a single roof. Establishing a Korean holdings company was also a way to weaken control by its Japanese headquarters.

However, in order to complete the transformation, listing Hotel Lotte is critical, which would have been severely jeopardized if Shin had received jail time.

Its global expansion is likely to accelerate, as well, with Shin at the helm.

The retail giant has been focusing on Southeast Asia this year in search of potential markets.

It is planning to invest $4 billion in Indonesia to build a big-scale chemical plant. It has invested 2 trillion won in Ho Chi Minh City in Vietnam to build an eco-smart city, all of which would be impossible with a vacancy of leadership.

“We respect the court’s decision,” said Lotte Group in a statement Friday. “Lotte Group employees and executives will collaborate more to do their best to contribute to Korea’s economic development and fulfill the company’s social responsibility.”

The prosecutors did not release an official statement as of press time, but are likely to appeal.

He allegedly made a donation of 7 billion won to a sports foundation controlled by Choi.

Prosecutors have sought a four-year jail term for Shin and the verdict is scheduled for Jan. 26.