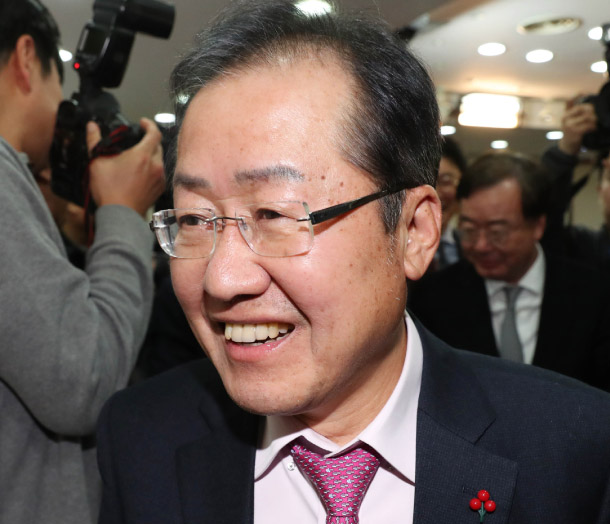 Hong Joon-pyo, the chairman of the main opposition Liberty Korea Party, at a press conference on Friday after the Supreme Court upheld a lower court’s decision to acquit him of a bribery charge stemming from a suicide list left by a construction tycoon. [YONHAP]

The Supreme Court upheld a lower court’s decision on Friday to acquit Hong Joon-pyo, chairman of the main opposition Liberty Korea Party (LKP), of a bribery conviction stemming from a suicide list left by a construction tycoon.

In September 2016, the Seoul Central District Court found Hong, then governor of South Gyeongsang, guilty of accepting 100 million won ($93,000) from the late businessman Sung Wan-jong, former chairman of Keangnam Enterprises, and sentenced him to 18 months in prison and a forfeiture of 100 million won.

Sung committed suicide on April 9, 2015, after revealing that he gave money to top politicians for years, and left behind a list of individuals within the inner circle of then President Park Geun-hye.

The prosecution indicted former Prime Minister Lee Wan-koo and Hong in July of that year.

Hong was convicted of accepting the money from Sung in June 2011 through his aide Yoon Seong-mo, former vice president of Keangnam, ahead of a party leadership election.

The district court found Hong guilty based on the testimony of Yoon. But in February, the Seoul High Court overturned the district court’s decision and ruled in favor of Hong.

It claimed that Yoon’s testimony did not prove the charge against the governor beyond a reasonable doubt as it was inconsistent with testimonies of other witnesses, such as the driver and a secretary, and contradicted certain facts.

The Supreme Court upheld the ruling by the high court that the evidence was insufficient.

Former Prime Minister Lee, who was accused of receiving 30 million won in an illegal campaign donation from Sung in 2013, was also acquitted by the top court the same day.

“It’s a great relief to be freed of the false charges,” said Hong in a press conference in Yeouido Friday after the court ruling, but stressed that he will “make prosecutors take proper responsibility for fabricating evidence during the investigation and court process.”

Hong’s exoneration empowers him to carry out his party’s agenda and move ahead with leading preparation for next year’s local elections, as his party faltered for its association with the impeached former President Park Geun-hye.

“Over the past two years and eight months, I was embroiled in an absurd case,” the former presidential candidate said. “Now that I have broken free from the fetters and slander surrounding me, I will put all my energy into focusing on how to protect Korea’s conservatism.”

The LKP also expressed “great joy, though it was natural” that its leader was exonerated, and Chang Je-won, a spokesman of the LKP, said through a statement, “Just as Chairman Hong emerged from a tunnel after a long time, the LKP will also take off after its long stagnation following impeachment.”

But lawmakers of rival parties came down on Hong after his acquittal by the top court. Yoo Ui-dong, a spokesman of the minor opposition Bareun Party, said through a statement that day, “This is nothing for Chairman Hong to be pleased about. The Supreme Court’s ruling merely cited a lack of evidence, but that does not prove that Hong is purely innocent either.”

“Hong Joon-pyo as an individual may have been acquitted, but that is a separate matter from Hong Joon-pyo as a politician,” Yoo added. “The people may in their hearts have already determined whether Hong is guilty, as he stood as a defendant after the ruling of the lower court over the ‘100 million won note’.”