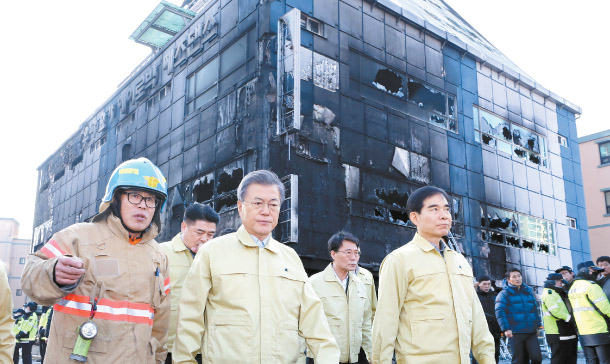 President Moon Jae-in on Friday visits the multistory sports facility that was engulfed by fire in Jecheon, North Chungcheong, where 29 people died. [YONHAP]

Relatives of the 29 people who died in a blaze at a multistory fitness center in the North Chungcheong city of Jecheon on Thursday are questioning why authorities could not break the glass panels on the second floor of the building in the first hour of the rescue, where at least 20 women were stuck inside and likely suffocated.

“I could reach my mother-in-law by phone, who was stuck inside the building until 5:20 p.m., which means there were people inside the building who were alive for at least one hour and 27 minutes,” said a man surnamed Park. “In all that time, why didn’t the fire department think of breaking the glass panels on the second floor of the building?”

The blaze, which was first reported to the fire department around 3:53 p.m. and put out some three hours later, killed 29 and injured 31 as of press time Friday.

Firefighters got to the scene at 4 p.m.

“My wife called me around 4 p.m. and said, ‘I am in the sauna on the second floor and I can’t see anything and I can’t breathe because of the gas, they have to break into the building by breaking the glass panel from the outside,’” said a man surnamed Yoon. “So I called the fire department at 4:07 p.m. and told them there are lots of women in the sauna on the second floor who are stuck inside and cannot escape because of the fire and the gas. You have to break the glass from the outside.”

The building did not have many windows that opened, but instead had glass panels.

“The toxic gas and smoke from the fire on the first floor of the building traveled up to the sauna on the second and third floor, and probably remained trapped inside due to glass panels,” said a firefighter.

The first time a firefighter broke a glass panel was around 6 p.m., according to some relatives.

“Everyone in the sauna could have lived if the firefighters had broken the glass panel from the outside,” said a man surnamed Ryu, who lost his wife in the blaze, in a meeting with Minister of the Interior and Safety Kim Boo-kyum at the funeral center of Jecheon Medical Foundation on Friday. “But the firefighters broke the glass only around 6 p.m.”

When asked if Kim had heard why the firefighters failed to break the glass panels earlier, Kim replied, “I don’t know.”

“I think the firefighters could have saved more people if they broke the glass panels on the second floor and made people jump onto air mattresses,” said Wang Jong-soo, a witness.

“Firefighters carry axes, but I don’t think they could’ve broken a reinforced glass with those,” said Lee Young-joo, professor of emergency management at University of Seoul.

For the first 30 minutes of the rescue operation, the firefighters had a hard time approaching the building.

“We couldn’t install the tiller truck as fast as we could to the building because we were blocked from reaching it up close due to cars parked nearby,” said Lee Sang-min, head of the Jecheon Fire Department. “So our rescue operation was delayed some 30 to 40 minutes as we moved the cars.”

The firefighters ended up rescuing one person using its tiller truck. In this time, a private tiller truck that approached the building saved three people.

Critics have also pointed to the fact that the finishing material of the eight-story fitness center was made with insulation materials that are inflammable.

Firefighters said by the time they got to the building, most of it was already ablaze.

“We have confirmed that the finishing material of the building was made with the Dryvit method,” Yoo Young-jin, head of the architectural permit department of Jecheon city government told the Hankyoreh on Thursday. Dryvit is a U.S. manufacturer specializing in exterior insulation and finish systems, but in Korea the term is used to indicate walls made with insulation.

Yoo added, “We think that this was one of the reasons why the fire spread so rapidly, as the inflammable insulation material caught fire quickly.”

In a similar case, a 2015 fire at an apartment in Uijeongbu, Gyeonggi, killed and injured some 130 people. The finishing material was made with insulation that was highly inflammable and exuded toxic gas when burning.

The central government that year amended the Building Act to ensure that structures higher than six stories must use nonflammable material.

But the law is not applied retroactively to structures already built, including the fitness center in Jecheon, which was built in 2011.

“The blaze began on the first floor of the building and the smoke travelled up the building very fast,” Lee said. “It filled up the women’s sauna facility and many women inside were blinded by this, and we think many died of suffocation.”

“A lot of the bodies inside the sauna were found without much clothes on,” said a nurse on site. “Many of them do not show signs of being burnt, so I think they died of suffocation.”

Police confirmed through CCTV camera footage that the blaze began from the ceiling of the first floor parking lot of the building. There was some repair work on the ceiling going on at the time.

“We are investigating what type of repair work was going on at the time,” said a police officer. “All possibilities are open. There may have been a short circuit or a human error.”

Liberty Korea Party Rep. Hong Chul-ho received a report from the National Fire Agency that said the sprinkler was manually shut off and therefore did not work during the fire, according to JoongAng Ilbo’s exclusive report Friday.

“We cannot say much on the subject yet,” said a spokesperson of the National Fire Agency. “But the fact that the sprinkler was turned off is a serious problem.”

Rep. Hong’s office told the JoongAng Ilbo that the building received a regular checkup by the fire department on Oct. 31 of last year and that the sprinkler was working at the time.

The owner of the building is a man surnamed Lee who was injured in the blaze and is being treated at a hospital in Wonju, Gangwon. Authorities plan to question him once his state improves.

Authorities have identified 28 out of the 29 who died as of Friday morning. The unidentified person, a man, is to undergo an autopsy. Of the dead, 23 were women, 20 of whom were found dead in the sauna facility on the second floor. The exit door of the sauna, an automatic sliding door, may not have operated properly, as 11 of the 20 women were found near it.

The 20 women included an 80-year-old woman, her 49-year-old daughter and her 18-year-old granddaughter. The 18-year-old, surnamed Kim, was a high school student who had just taken the national college exam, and she and her mother was visiting her grandmother for the end-of-year holidays.

“We have lost all of them so suddenly,” said a relative. “The father of the daughter is just utterly speechless.”

Among the victims was a 49-year-old woman named Choi Soon-jeong, who regularly exercised at the gym on the fourth to seventh floors.

“My daughter, a junior in college, had saved up her earnings so all of us could go on a family vacation to Vietnam together in January,” said Choi’s husband, a 52-year-old surnamed Lee. “We were all so excited about it. On the phone, my wife said, ‘I’m in trouble, there is a big fire here,’ and I told her to get out of there as soon as she could. She said she would try to go to the roof, but when I called her the third time, she stopped talking in mid-sentence. I think that’s when she suffocated.” Choi was found on the seventh floor.

“My wife worked all her life,” Lee said, “night and day, to bring up our three children, and we were so close to enjoying the rest of our life together, when…”

Lee was unable to finish his sentence.

Choi worked as a cook at a school cafeteria during the day and as a chauffeur during the night.

The female victims also include a 19-year-old surnamed Kim who was at the gym when the fire began.

“Her father was on the phone with her for an hour after the blaze started,” said Kim’s grandfather. “He told her not to speak because then she would breathe in the smoke and the gas. She said there are five them in one room and that they cannot open the door. The authorities could have broken a glass panel to let the smoke out. I don’t know what they did for a whole hour. We stood outside and we could still hear her voice on the phone. It broke us.”