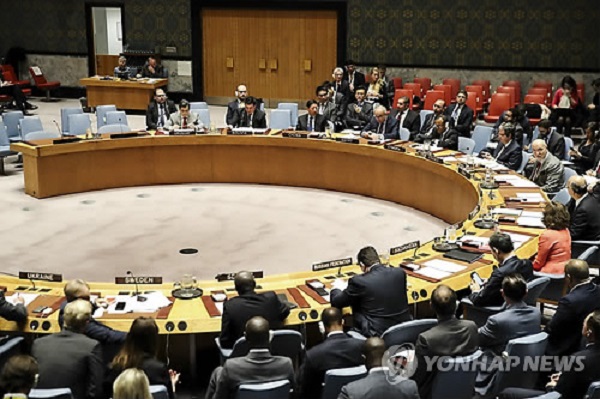 The United Nations Security Council unanimously passed toughened sanctions against North Korea on Friday in New York for its nuclear and ballistic missile programs, including further restrictions on its imports of oil.

Condemning the North's latest test of an intercontinental ballistic missile on Nov. 29, the 15-member council slapped the regime with caps on its imports of refined and crude oil and blocked key sources of revenue suspected of funding the weapons programs.

The U.S.-drafted resolution seeks to slash refined petroleum product exports to North Korea by 89 percent. The council imposed an annual cap of 2 million barrels in September, and the new resolution calls for a further reduction to 500,000 barrels.

It also requires UN member states to expel North Korean overseas workers within 24 months. The workers' income is believed to be extorted by the Pyongyang regime to fund its weapons development.

"On November 29, Pyongyang launched an intercontinental ballistic missile -- this was another attempt by the Kim regime to masquerade as a great power while their people starve and their soldiers defect," U.S. Ambassador to the UN Nikki Haley told the council. "But for the international community, this is an unprecedented challenge from a defiant state, so we have leveled an unprecedented response."

If North Korea conducts another nuclear or ICBM test, she warned that the new resolution commits the council to take further action, a reference to a clause that allows the panel to further cut petroleum supplies.

"We welcome and support the decision," it said in a release. "We again urge Pyongyang to stop its reckless provocations and come out to the path of dialogue for peace and denuclearization that our government and the international community have proposed."

Seoul also said the adoption of the fresh sanctions is yet "another indication of stern determination that the North's continuing nuclear and missile developments will never be tolerated in any way."

U.S. President Donald Trump has urged China, North Korea's main ally and trading partner, to halt oil supply to its neighbor. Beijing, which has traditionally been reluctant to exert pressure that could destabilize Pyongyang, backed the new resolution.

The U.S. and China, along with Russia, France and Britain, are the council's five permanent members with veto power.

Resolution 2397 also requires member states to seize and impound vessels in their ports or waters that are caught transporting banned goods to and from the North. Moreover it bans imports of North Korean food, agricultural products, minerals, machinery and electrical equipment to deprive the regime of at least $200 million in annual export revenues.

Crude oil exports to North Korea are capped at 4 million barrels a year. And exports of industrial equipment, heavy machinery and transportation vehicles to the country are banned. The resolution also blacklists 15 North Korean individuals and the country's Ministry of the People's Armed Forces for their links to the weapons programs.

The council unanimously adopted two sets of sanctions following the North's ICBM tests in July and its sixth nuclear test in September.

But Pyongyang has vowed to continue its weapons development, and after its latest ICBM test, declared the completion of a "state nuclear force" capable of hitting anywhere in the U.S. with a nuclear weapon.

The U.S. president has threatened to "totally destroy" Pyongyang if necessary and engaged in a war of words with its leader, Kim Jong-un.